Time to talk birds, specifically the ones I posted photos of in my "end of year bird quiz" . To spice things up a bit, instead of just listing as each species and writing about it a little, I'm going to throw them all onto an ever expanding cladogram.  Hopefully this way both the readers and myself will be able to learn a little about the individual animals themselves, and their relationships to one another.  Ornithology is certainly not an area of specialization for me.  But birding is one of the "outdoor" activities I engage in most often.  This is primarily because it can be done anywhere, even the comfort of your own home.  So I think this will be a fun little project and I'm excited to be able to share it with you all. But a word of warning: apparently a lot of the traditional bird groupings are not supported by molecular data, and many of their true relationships have yet to be resolved.  So I'll be doing my best to show true monophyletic groupings and relationships.  But if you know something I don't, please let me know.  That being said, let's dig right in and start with the birds from my quiz!  Read no further if you'd like to give it a shot before I start naming names.

I'm going to go ahead and start with bird #10, because it seems to have been one of the birds that was recognized the least.  But congratulations to Albertonykus for his correct guess of American goldfinch!  The reason this particular specimen may have confounded some of my readers is because after their molt each autumn, this species lose the bright, yellow feathers and take on a less vibrant coat of buff and olive tones.  This is in fact a male American goldfinch in his winter plumage.

There was one other finch among the birds, and everyone that guessed seemed to know its name.  It was #5, the house finch. As I've mentioned before, the house finch is not native to this part of the country, but its populations have spread from the American southwest and Mexico in the last several decades after being introduced to the east coast over 50 years ago.  I know its wishful thinking, but I like to imagine that the ginger male (on the left) is one of the boys that was fledged from my porch last spring, and he's stopped by for a visit with his new girlfriend (on the right).  Both the American goldfinch and the house finch are nested within Fringilidae, the true finches.  And with that, we have our first branch on the avian family tree. 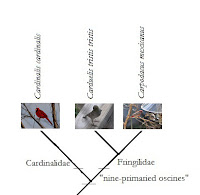 Expanding our relationships a little further, our next bird is #2, the northern cardinal.  Males of this species are extremely territorial, which leads me to believe that the male I see in my yard, normally accompanied by a female, is the same male that I've been seeing in my yard for quite some time now.  Most of the cardinals I'm used to forage for dropped seed on the ground, but this one has no problem sitting at the feeder and securing a space for his mate right beside him.  The northern cardinal is a member of the family Cardinalidae, and Cardinalidae and the previously mentioned Fringilidae are united within a strongly supported group of "nine-primaried oscines".  This group of songbirds has, as you may have guessed, nine visible primary feathers on each wing (with a smaller, hidden tenth primary).  So we can add them to the cladogram as well.

And last but not least (for the time being) we have #4, the house sparrow.  Of all of the small brownish birds that I've seen hopping around in Edmonston, 99% have got to be house sparrows.  They also tend to eat 99% of the seed I put out.  Which is unfortunate, because they are an introduced species that have outcompeted a lot of the local songbirds.  As much as I like all birds, if anyone has an effective, passive method of keeping their numbers down, I'd love to hear from you.  Like all "true" or "Old World" sparrows, the house sparrow (which I believe to belong to the subspecies P. d. domesticus) belongs to the family Passeridae.  This family is a sister group to the "nine-primaried oscines", all of which can be united within the superfamily Passeroidea. Passeroidea consists of seed-eating, hostly herbivorous "sparrow-like" birds with a global distribution.   But it is a monophyletic grouping that is supported by molecular data. So once again, our cladogram grows.  For now we've got a part of the picture.  Stay tuned for more in the coming days!