Between work, school, and trying to blog regularly, I pass the time in a lot of different ways.  Here are a few of the non-science related projects that I've worked on.  Enjoy! 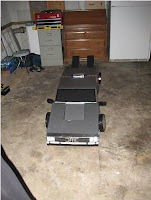 Back in December of 2009, I was invited to an '80s themed Arcade-Christmas Party by my good friends the Brewer's.  They have a newsworthy collection of restored arcade machines set up in their basement, and had recently purchased a "Back to the Future: The Pinball" machine to add to it.  This was truly a momentous occasion, and the celebration was certainly warranted.  To honor the event, I decided to dress as Marty McFly.  I mean, who doesn't want to be Marty McFly right? Obviously an easy enough question to answer, but the thought that others might also want to dress as Marty didn't cross my mind.

I went on oblivious until I asked my brother who he would dress as.  Of course, he'd be Marty.  Knowing full well that having two Martys encounter each other in the same time-space could create a time paradox (the result of which could cause a chain reaction that would unravel the very fabric of the space-time continuum and destroy the entire universe) I knew I'd have to bail on my original plan.  So there I was, a week before the party with no costume and no clue as to how I should dress.  I thought back to my childhood grasping for ideas and asked myself, "What was the greatest thing to come out of the '80s?".  While I had many favorites, it finally came down to the Transformers and the DeLorean time machine.  And then it hit me: you can be both!

I got out a pad of paper and a pencil, and spent my weekend taking measurements, and sketching designs.  By Monday I had all of the material I needed ready (a bunch of cardboard and rolls of colored duct tape) but was still short on time.  For four days after work I sat in my man-cave and worked on my creation.  It was a learning process, to say the least.  I'm not an engineer by any stretch of the imagination, so mixing form and function to a workable end was a trial-and-error experience.  By Wednesday, I had all the kinks worked out, and I began to flesh out my cardboard skeleton.  By Thursday night my work was complete: I had created my Transformer-DeLorean, and an accompanying Flux Capacator to go along with it.

I headed to the arcade and took my position.  People were pleasantly surprised to see a mini-version of the DeLorean hanging out down there, basking in the warm glow of the machines' light.  But they were in shock and awe when that DeLorean began transforming before their eyes.  Like I had upon its completion, people began nerding out left and right.  I know there were probably some there (and people out there reading this now) that probably thought (think) I was (am) crazy for going to all the trouble.  But I know you also wish you had a Transforming-DeLorean so we're square.  Plus, I won the costume contest, so I feel like it was a complete success.  I love the '80s. 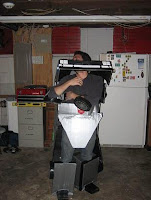 The transformation (take note of the sweet Autobot logo on the chest). 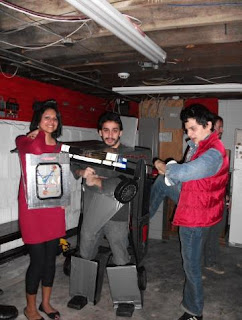 Christina as the Flux Capacitor, me as the DeLorean, and Daniel as Marty.  Thanks to Adele and Stephanie for the photos.