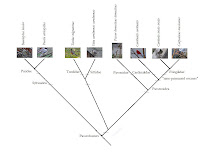 Alright, boys and girls.  I started this little endeavor a month ago.  It's time to bring it all together, once and for all.  So far in our virtual birding roundup, we've spent the last two parts talking about various families within the order Passeriformes. Which makes sense considering that there are over 100 different passerine families, and they contain more than half of all known bird species (Mayr, 1946).  For the most part, the relationships between these families were traditionally defined by morphological characters, and were believed to be fairly well understood.  But recently, more and more molecular analysis has begun to show a different phylogeny; one that we still don't have a full picture of.  And that's where the next bird from our quiz comes in. 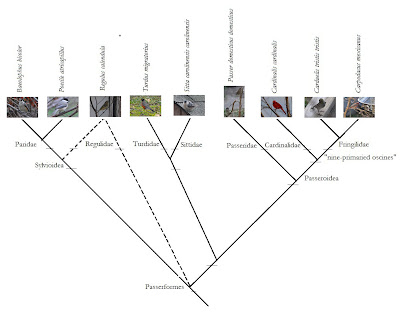 Bird #11 was another tricky one, and was one of the two birds that I had never previously seen in my backyard.  But Susan was able to correctly identify it as a ruby-crowned kinglet, despite the fact that there is no visible indication of the rufous crown in this image.  Perhaps the white wing bars and eye ring gave it away.  But identifying a bird is only half of my objective here.  The other half involves figuring out how it's related to other birds, and this one is tricky.  All kinglets are placed within the genus Regulus in the family Regulidae, situated in the order Passeriformes.  But what is their relationship to other passerines?  That part is not as clear.  Their resemblance to Old World warblers traditionally placed them within Sylvioidea, despite them having their own family status (Monroe, 1992).  And while regulids are more closely related to the sylvioid superfamily (and the passeroid, certhioid, and muscicapoid superfamilies), than to others within Passerida, they cannot be directly linked to any one superfamily given the current data (Harshman, 2008).  That being said, their place on our growing cladogram is not as certain as the other birds we've seen so far.  Regulidae either lies within Sylvioidea as a sister group to the Paridae, or is part of a soft polytomy with Sylvioidea and the "Turdidae + Sittidae + Passeroidea" clade.  This uncertain relationship is indicated by the dashed lines, representing both of the potential phylogenies.

And that does it for the Passeriformes from the quiz.  But there are still three birds left.  And if they aren't passerines, then what are they?  Let's jump back to bird #8.  This lovely lady is a red-bellied woodpecker.  It's hard to tell from this shot, but the red on her nape does not extend to the bill like in the males of this species. It's also difficult to see the rosy belly that gives this bird its name.  I'm not sure if this is the same female I saw last year or not.  But I know she loves the suet I put out just as much if it isn't.  She loves it so much in fact, that she doesn't let a whole lot of other birds near it when she comes around.  Which is unfortunate for the next bird in the roundup.

Bird #9 is another woodpecker, but is it a downy or a hairy?  Most people who guessed were confident that it was a downy woodpecker, and they are correct.  But it can be pretty hard to tell.  Particularly in a photo where there is nothing to use as a scale reference.  Hairy woodpeckers are larger than downy woodpeckers.  Their bills are also longer.  But this guy was small, and had a pretty short bill, so I'm confident it is a downy, and also that it is a male.  The red patch on the back of the head is a dead giveaway for the latter.  Downy woodpeckers are the smallest species of woodpecker found in North America, but this guy didn't seem to bothered by that.  For a while, he refused to approach my suet cage while the above mentioned red-bellied was feeding.  But he eventually got tired of waiting, and as he moved in, the red-bellied seemed to be bothered by him, and she moved on.  Good work, little guy.

But regardless of who intimidates who, these two birds are still very close.  At least on our cladogram.  They are each others closest relatives. All woodpeckers are united in the family Picidae.  And picids are pretty cool. They have extremely strong, sharp, long bills that they use to drill into tree trunks with and sticky bristled tongues that help them extract invertebrates from underneath the bark.  They also use their bills to "drum" to one another as a means of communication.  They have smaller brains that are oriented differently than the brains of other birds as an adaptation to the amount of stress they put  on them as they peck away (Gibson, 2006).  They also have feathers covering their nostrils and nictitating membranes that cover their eyes, both as means of protecting sensitive orifices from splintering wood (Schwab, 2002). But as awesome as they are, many picids are also, unfortunately, threatened or endangered.  They rely heavily on the trees where they nest and search for food, and habitat loss and fragmentation means a loss of woodpeckers as well.  Not cool. 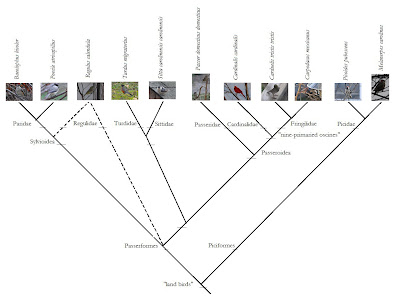 Picids are members of the order Piciformes, which includes not only woodpeckers, but also honeyguides, barbets, toucans, puffbirds, and jacamars.  Most of them have zygodactyly arrangement of digits on their feet, where two toes face forward, and two toes face backwards.  This arrangement of digits is common in arboreal birds, because it allows them to cling to tree trunks better than the average avian.  Piciformes are also unique in that they do not have downy feathers at any point during their life (with the exception of the jacamars).  On our cladogram, Piciformes is a sister group to Passeriformes, and together they combine to form an informally named group of "land birds".  Although informally named, the clade is supported by morphological evidence.

Phew! That's a lot of birds so far, and we've nearly reached the end of our roundup.  So who is left?  It's bird #12, the mourning dove.  The mourning dove (also known as the Carolina pigeon or turtledove) is one of the most widespread birds in North America.  This is probably because they breed like crazy, and a monogamous pair can have up to 12 offspring a year.  That's a lot of mouths to feed, but it's no reason to mourn.  They actually get their name from the calls they make, which I guess to some sound like someone who is mourning.  The wooo-OOO, ooo, ooo call is made by both males and females, but if you've ever startled one of these guys and heard it fly away, you may have caught an earful of something else.  It kind of sounds like a whistle, but the bird isn't calling out in alarm.  That is actually a sound produced by the wings during takeoff.  Perhaps this auditory signal warns others of approaching danger, or is just a way of saying "goodbye" to neighboring birds.  Either way, it's pretty cool in my book.

The mourning dove is a member of the family Columbidae, which is a monophyletic grouping of pigeons and doves.  And Columbidae falls within the order Columbiformes, which is comprised of Columbidae and Raphinae, the extinct, flightless birds of the Mascarene Islands (that's right, there was more than one giant flightless "pigeon" that humans drove into extinction).  Interestingly enough, the mourning dove is also the most widely hunted game bird in the United States.  There must be something about the way columbiformes taste.  Regardless, the mourning dove is the outgroup taxon in our cladogram, and Columbiformes is a sister group to the "land bird" clade within Neoaves (all "modern" birds with the exception of paleognaths and the "fowl"). 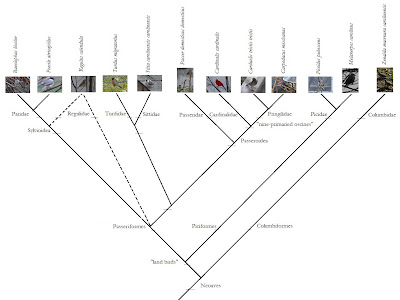 So throwing it on the "tree" we finally have a pretty complete picture of the phylogenetic relationships of the birds that visited my backyard on that warm December day.  It was a great way to close out 2011, and I hope you all have enjoyed starting out 2012 with both my avian antics, and this new format.  I'm not gonna lie, I thought it was pretty legit.  And I think I'll keep it up with any additional birds that I happen to snap a photo of.  More quizzes?  Just building on the tree?  I don't know, what do you think? I'll need a clever name too.  But I'll cross that bridge when I get to it. Right now I have a few other projects to finish up before the month is over, so I'll talk to you all in February!