Are you ready for some birding?  If you love watching avian dinosaurs as much as I do, and you love citizen science, why not participate in the Great Backyard Bird Count (GBBC)?  I know I'm going to.  All you have to do is sit and watch birds, record which ones you see, and send that data to the Cornell Lab of Ornithology / the Audubon Society / Bird Studies Canada so that they can compile it and see the big picture about what kinds of birds are out there, where they are hanging out for winter, and how many of them are around.  When I say participation is both fun and easy, I totally mean it.  Find out for yourself, and participate in the GBBC when it begins this Friday, February 17, 2012.
Posted by David Tana at 12:00 AM No comments: 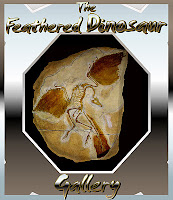 It's the moment you've all been waiting for.  The Feathered Dinosaur Gallery has been posted to ART Evolved: Life's Time Capsule, and it is quite impressive.  People love theropods, I suppose.  Especially the feathered ones.  I can't say I blame them.  The presence of feathers in non-avian dinosaur groups provides another line of evidence to support the fact that living birds are dinosaurs.  When I was a kid growing up, I never would have imagined we'd have so many wonderfully preserved fossils showing filamentous integumentary structures on the bodies of non-avian animals. Once again, we are not only provided an example of evolution at work, but we also see that new information can be added to an existing body of knowledge, and our scientific understanding can change.  I can't imagine a more appropriate gallery for Darwin Week, so thanks to the crew over at ART Evolved for putting it together, and to everyone who submitted.  It looks great!

Posted by David Tana at 9:10 PM No comments:

On this day, 203 years ago, Charles Robert Darwin was born.  And his brilliant theory is more important today than it has ever been.  Evolution; descent with modification; whatever you call it, the idea that species change throughout time, and are all descended from a common ancestor, is one that connects us to the rest of the living world.  This is a connection that I've always appreciated, yet there are many out there that refuse to accept it.  I've often heard people say "evolution is only a theory", which means they believe it's nothing more than a guess.  And if they believe it to be a guess, it's just as likely as any other guess.  But in science, a theory is so much more than a guess.  It's a body of knowledge, obtained through repeatable observations, that can be used to describe some aspect of Universe to to the best of our ability.  Is a scientific theory subject to change?  If course it is.  As new information is gathered, it can be incorporated into a growing body of knowledge.  But the underlying principles stay the same.  In this case, species do change over time.  They are not fixed.  Through the processes of natural selection, mutation, genetic drift, and others, species do change throughout time.  If a trait is advantageous, it is passed on to the next generation.  If it is not, it gets removed from the population.  New species are born, others go extinct.  Evolution is more than just a guess.  It is a fact.  And I think Darwin Day is a great time to explore this fact in greater detail.  A good place to start is at the PBS Evolution website.  Learn about all facets of this theory, from how Darwin began to formulate it over 150 years ago, to the mechanisms that make it possible. This NOVA program is one of the best on the subject I've seen, and the website has a lot of other interactive features for teachers, students, and the general public.  Happy Darwin Day, and enjoy!
Posted by David Tana at 7:28 PM No comments:

A long, long time ago, I wrote a post about dinosaur integument color, and talked about "Dakota" the Edmontosaurus.  She, like her cousin "Leonardo" the Brachylophosaurus, is an exceptionally preserved dinosaur "mummy".  While most body fossil remains are made up of the hard parts of an animal (in the case of dinosaurs, it is generally their bones), these two hadrosaurines have lots of preserved soft tissue material.  Specifically mineralized skin and muscles.  Which is pretty cool, if you ask me.  From preserved skin and muscle, we can get a much better picture of what an animal would have looked like in life.  Don't get me wrong, we can tell a lot from the bones.  But the more information we have the better; every little bit helps.