The last two weekends in Maryland have started out with very powerful Friday evening storms. The derecho that took place last week was crazy.  Strong winds and powerful thunderstorms surged as they moved from the midwest to the Mid-Atlantic coast.  But I was inland for it.  I can only imagine what it was like here at the beach.  During a bad, long lasting storm, consistently strong winds would cause swells which, upon reaching the shore, could generate extremely high surf.  The energy generated by the wind is expended along the shoreline as the wave reaches it, so the higher the winds, the greater the damage that could occur.  But winds and weather aren't the only thing that have an impact on the coastline.  I was reminded of that the other night as I observed a beautiful full "Thunder Moon" over the Atlantic Ocean, and thought of the powerful effect it has on the Earth's tides. 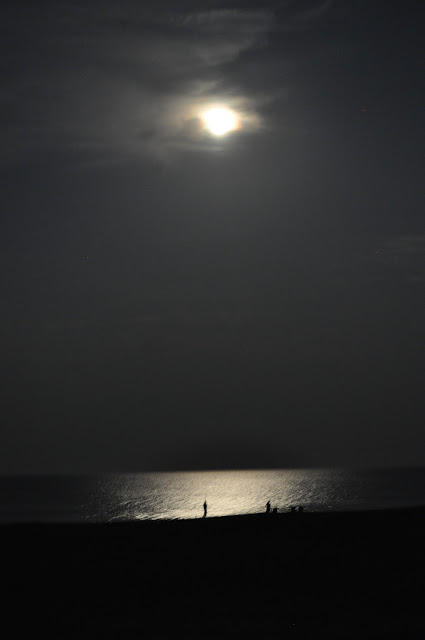 One of my favorite shorebirds is by far the brown pelican (Pelecanus occidentalis).  It is small in comparison to the other members of its genus, and it is a fairly common bird in my neck of the woods.  But that makes them no less interesting.  They also have a relatively rich fossil record.  Fossil Pelecanus are known from the Early Oligocene around 30 million years ago, and by that point they were already very like modern forms.


Brown pelicans are known for diving for their meals, which they catch in large gular pouches attached to their lower bill.  On land, they move about rather clumsily with their large bodies and webbed feet.  But in flight, they are truly magnificent.  Their long broad wings make them brilliant gliders. And when they flock together, which they do more often than not, they are a sight to see as they soar gently above the sand and waves.

Posted by David Tana at 8:15 PM No comments:


Time for a holiday! This week I'll be spending my days by the beach and bay, and am looking forward to a little relaxation, plenty of time outdoors, and a chance to share it with you all. The sea, home of our earliest ancestors, has always held a certain appeal to me.  While our more recent ancestors may have moved away from it for more terrestrial way of life, there are many plants and animals that never left.  And even more that returned to the waters and shorelines of the world secondarily.  I think I've always envied them a bit.  Combined with the endless hours I spent as a child combing the beach and watching the water, I always look forward to being able to return myself. So with that in mind, keep an eye out here and on Twitter for seaside science (among other things) this week.

Posted by David Tana at 4:36 PM No comments: