Another year comes to an end.

And what a full year it was. Thinking back to how I started my 2010, it's hard to imagine that 2011 is only moments away. There are several bloggers out there who have already done a wonderful job of gathering up the best of 2010, so I'll keep away from that at the moment. Mostly because I'm working to finish up the public commitments I made for the 2010 Paleo Project Challenge, hosted by Dave Hone of Archosaur Musings and Andy Farke over at The Open Source Paleontologist. I'll admit, my goals were nothing compared to getting papers and manuscripts published, preparing specimens, and writing books. But we all have to start somewhere, right? I figured I should report on the status of the tasks I undertook.
Read more »
Posted by David Tana at 11:59 PM No comments: 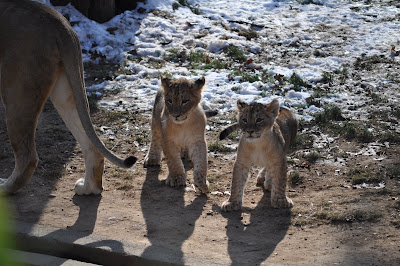 Well, technically speaking this isn't "new" as the two litters of african lion cubs were born at the National Zoo back in August and September. But what is new is that the cubs have finally been introduced to their father, Luke, and that they have been spending a little time in their outdoor yards each day, meaning that you can finally go visit them! Two weekends ago, the Friends of the National Zoo hosted an exhibit debut for FONZ members, and I was lucky enough to get a chance to meet the pride. I thought I'd take the opportunity to share some of my photos from the day.
Read more »
Posted by David Tana at 2:00 PM No comments: 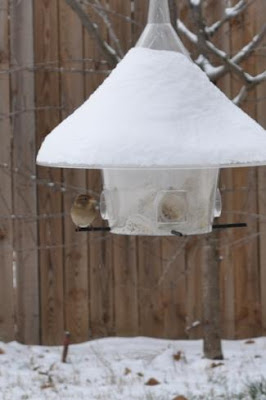 It's that special time of year again in the Northern Hemisphere. The ground is blanketed with snow, people are gathering with friends and family, and everyone is getting ready to celebrate the winter holiday season. For some, it starts the day after Thanksgiving. But I tend to really get in gear on the Winter Solstice. This year, it falls today, December 21, 2010, at approximately 18:38 EST. The Winter Solstice is the shortest day and longest night of the year, and marks the time when the Earth's axis is oriented farthest from the sun. But while long nights and little sunlight may seem a bit dreary, fear not! This also means that tomorrow, the day will have a little more light added to it, as will the day after that, and the day after that, for the next six months until we reach the Summer Solstice (the longest day and shortest night of the year). This is good news for those of us who can survive the winter, but prefer the warmer, sunlit seasons (like this female Passer domesticus at above-left).
Read more »
Posted by David Tana at 3:00 PM No comments: 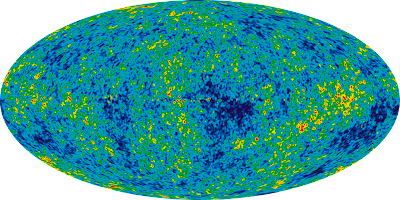 Microwave background radiation variation of the visible Universe, as observed by the Wilkinson Microwave Anisotropy Probe (WMAP). From the NASA/WMAP Science Team, via Wikimedia Commons.
I tend to focus on the terrestrial side of things here at Superoceras. Which is perfectly ok with me, Earth being such a dynamic, active planet. But beyond our tiny blue sphere is a vast and timeless Universe, the scope of which one can only begin to imagine (the best way to do so, in my opinion, is by walking along the "Scales of the Universe" exhibit at the Rose Center for Earth and Space at the American Museum of Natural History in New York). The Universe is bigger and older than most can even fathom, and recently, it seems like I've been hearing quite a bit about it in the news. Maybe it's time to branch out a bit and talk about some of the papers I've recently come across in regards to events beyond our planet, with a little background added for flavor.
Read more »
Posted by David Tana at 10:30 AM No comments:

It's here! Thanks to all who heard the call, rallied to the cause, and submitted to this months edition of The Boneyard Blog Carnival. This month, the Boneyard 2.4 is being hosted by David Bressan over at History of Geology, so be sure to stop by and take a look around! I love David's use of imagery woven into his text - it makes for an excellent read!
If you like what you see (and I'm sure you will) follow the Boneyard, or if you're a blogger, submit to next months carnival! Just e-mail a link to your blog post to boneyardblogcarnival(at)gmail(dot)com, with the word "Boneyard" in the subject line. All things paleo are welcome!
Posted by David Tana at 5:30 PM No comments:

The Boneyard wants YOU!

Hey, interwebs. How do you feel about paleontology? It's kind of cool right? Maybe you blog about it sometimes? You get all technical, reviewing papers? Or maybe you're more artsy, and just post neat images of things once living, long gone? Either way, you're awesome. Because paleontology is awesome, and you're blogging about it. Share that awesomeness with the world, and submit to The Boneyard Blog Carnival. Just e-mail a link to one of your posts to boneyardblogcarnival(at)gmail(dot)com with "Boneyard" in the subject line. You'll help promote your very own blog, be part of and contribute to a growing community of paleontology bloggers, and you'll get to put this sweet banner on your site. That's a pretty good deal if you ask me. 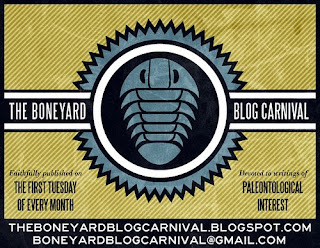 Posted by David Tana at 3:49 PM No comments:

It's true. Every since I was a wee lad, I've had a soft spot for chelonians. Perhaps it had something to do with a group of adolescent, transmogrified, "reptilian" practitioners of an unconventional martial art style. Or maybe it was just because the order Testudines is chock full of really (anatomically) odd, really cool critters. Shame on me, once again, for so far excluding an entire clade of organisms here at Superoceras. I'll use the recent publication of a paper in the Journal of Vertebrate Paleontology to change that, straight away.
Read more »
Posted by David Tana at 3:30 AM No comments:

2:00PM EST. I've been waiting all day for this. Whatever the news, I want to hear it. So I click the link. The link that NASA has been teasing me with all week. The page opens, the NASA TV video player appears and then...
Read more »
Posted by David Tana at 2:30 PM 4 comments:

At 2:00PM EST today, NASA has scheduled a conference on an "astrobiological finding that will impact the search for extraterrestrial life". When this was announced on Monday, the first thought that occurred to many was that life had been discovered somewhere else in the Solar System. Looking at the list of participants, I have to admit I thought it was a possibility. An extremely optimistic one, but a possibility nonetheless. There are several planetary moons in our solar system that have been proposed as potential hosts for life (Jupiter's moon Europa and Saturn's moon Titan being two of the most prominent). But in my humble opinion, if NASA had discovered life elsewhere in the Universe, they wouldn't have waited a few days to tell everyone.
Read more »
Posted by David Tana at 11:30 AM 2 comments: