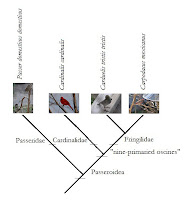 After a pretty positive response to "Part 1", I headed out of town and the roundup got interrupted.  Now Jenn Hall (who did a pretty great job of guessing honestly in my original post) would tell me to put some pants on and stop apologizing.  And I'm not gonna lie, that's pretty sound advice. So technically I'm not going to apologize. And I am going to wear pants. But I am also going to get this roundup going again.  If I'm not mistaken, we left off with the Passeroidea, the monophyletic grouping of "sparrow-like" birds.  Where should we go from here?

I'm going to jump back to the quiz and take a look at bird #6, which everyone correctly identified as a white-breasted nuthatch.  Of the nine subspecies of this bird, this particular one has the palest back and cap, and can be found in the old growth forests of the Eastern United States.  Even from a distance, they can often be easily recognized; particularly if you seem them heading down the trunk of a tree headfirst. There is no mistaking this bird for any other as it surveys the bark for the insects that make up part of its diet. The nuthatches are all lumped together in the family Sittidae, which contains only the genus Sitta. That's a pretty exclusive group of birds!

Next lets jump to a different avian family and talk about bird #7, who was also positively identified by all as the American robin.  The dark head indicates that this particular bird is a male, and a rather tenacious one at that.  I watched this fellow dig for worms for quite some time before he moved onto the next yard.  Despite being called robins, they are actually a type of thrush and belong to the family Turdidae.  This family lies within the superfamily Muscicapoidea, which is a sister group to Certhioidea.  The Certhioidea is the superfamily in which you can find the nuthatches.  So in terms of familial relationships, the robin and the nuthatch are more closely related to each other than they are to any other birds in the quiz.  There is no technical name for this "Turdidae + Sittidae" clade, but it is pretty well supported. 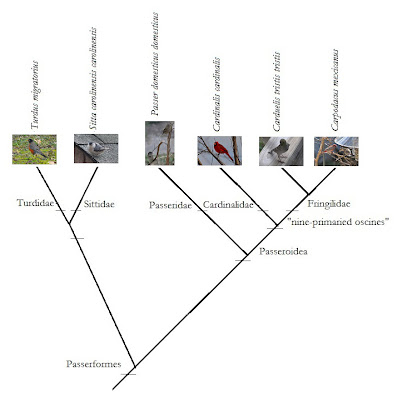 This "Turdidae + Sittidae" clade forms a sister group to the Passeroidea within the order Passeriformes so our cladogram grows a little more to incorporate all we know about the identified birds so far.


Passeriformes, however, is a very large order of "perching birds", so it's no wonder that there were a few more passerines in the quiz.  One of the last two was bird #1, the tufted titmouse.  I've always found this particular  bird to be a handsome one, and was pleased to see not one, but two feeding together on that warm December day.  Their grey crown and rusty flanks are easily noticed, and although flighty at times, this particular pair were the only two birds that allowed me to sit right next to the feeder as I photographed them.  They almost seemed as interested in me as I was in them.

The last passerine in the quiz was bird #3 and like the previous three mentioned, it was also identified by as all a black-capped chickadee.  At first I wasn't sure about this one.  It easily could have been a Carolina chickadee, as the two different species are nearly indistinguishable from one another.  At least physically.  Fortunately, I got to hear them singing to one another, and the familiar "chick-a-dee-dee-dee" call was slow and low-pitched, indicating that they were in fact black-capped and not Carolina chickadees.  Both the titmouse and the chickadee belong to the family Paridae, so like the nuthatch and the robin, they are more closely related to one another than they are to any other birds in the quiz. 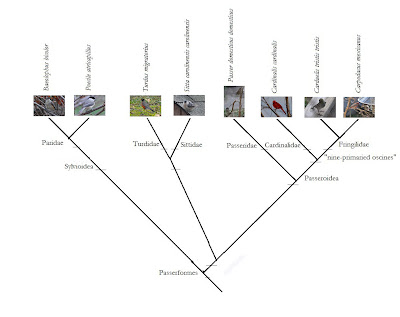 Paridae is nested within the superfamily Sylvioidea, which forms a sister group to the previously established "Turdidae + Sittidae + Passeroidea" clade.  And all of these clades can be united within  Passeriformes.  But we've still got a few birds to go, and I'll finish up with the remaining third in the next part of the roundup.  I hope you'll stick around for it.