And just as quickly as it started, SVP was on its way to ending. After the last technical sessions and posters, the "Paleo-Terps" met up for one last supper before heading off to the SVP Awards Ceremony. As always I was both pleased and impressed with the winners of the Lanzendorf PaleoArt Award for two-dimensional art, three-dimensional art, scientific illustration, and computer animation, a new category. I was also glad to see the Romer Prize get awarded to Jennifer Olori of the University of Texas at Austin for her phenomenal talk entitled "Developmental features of microsaurs (Lepospondyli), and consequences for the evolution of development and phylogentic relationships within Tetrapoda". All of the Romer Prize talks were good, but Jen's really stood out. Congratulations to all of the award/grant/prize/medal winners!

Next was the After-Hours Party. According to SVP Vice President, Dr. Philip Currie, who presented at the Awards Ceremony, this 70th Anniversary Meeting was the largest meeting in the history of the Society. So mixing all of those vertebrate paleontologists with a cash bar and a dance floor was definitely a sight! I'm fairly certain a good time was had by all, even if I don't have the photographic evidence to prove it (but I'm sure someone out there does). But rest assured, the dinosaur was walked.

That about sums up the events of the 70th Anniversary Meeting of the Society of Vertebrate Paleontology. At least from my point of view. I had a great time seeing old friends, meeting new ones, and catching up with people I know from the interwebs that I can now associate a friendly face with. Thanks to everyone for making it a memorable meeting. I look forward to seeing you all again in Vegas! But for now, it's time to get some rest. The road home later today is going to be a long one. Especially if we make a pit stop at the Carnegie Museum. Speaking of which, here are a few more photos. 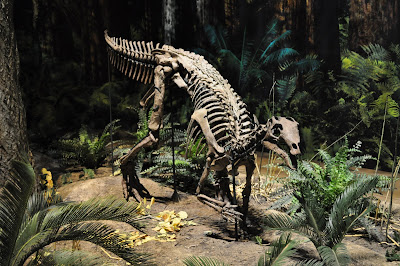 Camptosaurus aphanoecetes, a dinosaur I haven't seen on display in a museum for years. Check out those sweet ossified tendons on its back. 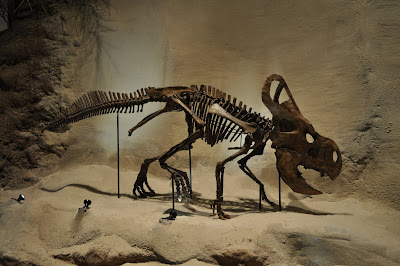 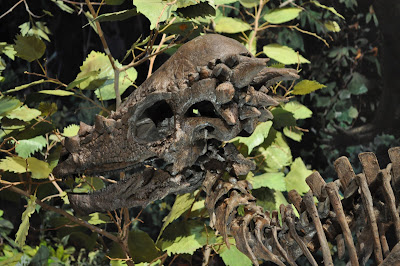 Even my non-paleontologist girlfriend made a comment on the similarity between this knobs and spikes on the skull of this Pachycephalosaurus wyomingensis and those of Dracorex hogwartsia. 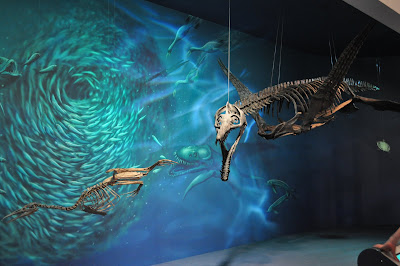 This Hesperornis is having a bad day. This Dolichorhynchops is about to have lunch. The sea turtle in the background will have a great story to tell his friends later. 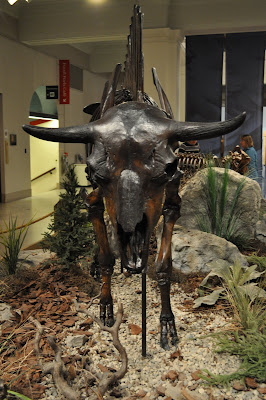 If you mess with the Bison, you'll get the horns. 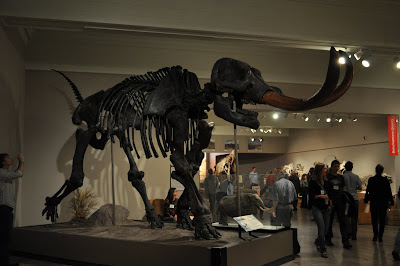 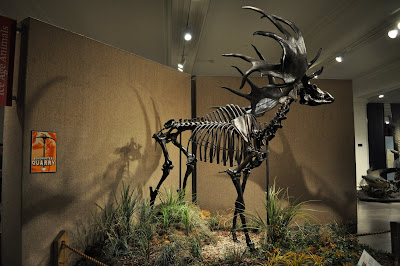 Nice rack, Megaloceros giganteus.
Posted by David Tana at 3:00 AM