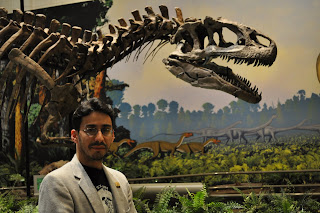 And what a night it was! The Carnegie Museum of Natural History (CMNH) played host to the SVP's 70th Annual Meeting Welcome Reception, opening its doors and several of its halls for a fantastic evening. Good food, good friends, good times all around. But despite all of that, the real stars of the show were the fossil vertebrates. This post will talk about a few of the dinosaurs (don't worry non-dinosaur folks, I talk about other vrertebrates in future posts, I swear), in their new exhibit "Dinosaurs in their Time". Here for your viewing pleasure, are a few photos of them (obligatory shot of me with Allosaurus fragilis at left). 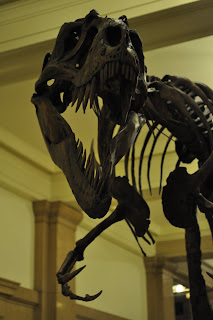 As we entered the museum, we were greeted by a familiar face from SVP '08 in Cleveland: "Jane". It was good to see her again, and I'm glad she appears to be working out some of her ongoing issues. Long has their been a debate as to this animal's true identity. Since her discovery in 2001, "Jane" had been associated with a previously collected skull of an animal known as Nanotyrannus. It was thought to be a distinct genus based on the skull, but with the new postcranial material provided by "Jane", many started to question this, and now think that Nanotyrannus is more likely just a juvenile Tyrannosaurus rex. I agree, and think this is more than likely a case of initial mistaken identity than anything else, but I'm sure the back and forth will continue for some time. 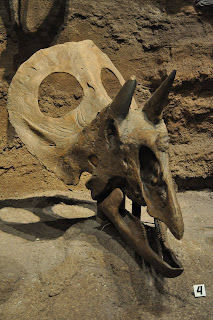 Speaking of dinosaurs with questionable identities, the Carnegie Museum has a lovely Torosaurus skull on display. But this is another case where evidence has been presented that Torosaurus is not a unique genus either, but rather, represents the adult form of Triceratops. Many of you may recall this hitting the press a few months back (or perhaps you heard something different since most media outlets picked up on an inaccurate story and continued to relay an inaccurate message for some time) . Again, we have a situation in which there is some back and forth in the dino-paleo community. I think that the hypothesis is valid, but I don't know if it will be proven or falsified in the end. Only time, and research, will tell. But once again for the record, Triceratops isn't going anywhere either way. 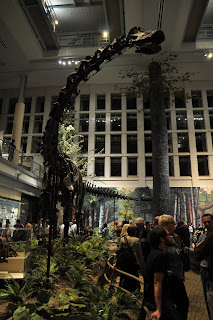 And last but certainly not least, what would a first visit to the CMNH be without a meeting the Carnegie's first dinosaur, Diplodocus carnegii. Despite not being the type species, D. carnegii is the most complete, most well known Diplodocus of them all. "Dippy" shares a long history with the Museum, and I've wanted to meet him for many years. Needless to say, I wasn't disappointed when our paths finally did cross. He looked great on his new mount, in his new hall, surrounded by a Lanzendorf award winning mural by Tess Kissinger and Bob Walters of DinoArt - The Complete Dinosaur Art Studio. Along with all of the other dinosaurs from the Morrison Formation, Andrew Carnegie's Diplodocus looked right at home, as he should. Casts of this specimen can be found in museums all over the world, but after spending around 150 million years in Wyoming, Pittsburgh is where "Dippy" ended up resting his old bones.

A few drinks and several hundred photos later, it was time to head back to the hotel and get ready for Monday's talks. I'll be back with more on them later, as well as more photos from the Carnegie Museum. Thanks to the Carnegie Museum of Natural History and the Society of Vertebrate Paleontology Host Committee for a great night!
Posted by David Tana at 11:30 PM