That's right folks. On October 5th, 1905, Henry F. Osborn formally named Tyrannosaurus rex in the literature, and of all the dinosaurs known to science, T. rex is by far the animal that pops into the minds of the masses when they think of the "terrible lizards". Now I'll admit, Tyrannosaurus has never been my personal favorite (sorry Dr. Holtz!), but I'll certainly celebrate the day. Why, because of all the dinosaurs, this is the one that has probably had the most influence on the most people. How many times have you walked into a fossil hall and been greeted by a jaw full of banana sized teeth, tiny arms, and a head so massive you know it was impossible to find a decent hat to put on it, even on your birthday? If you're anything like me, more than you can count. So happy (67,000,105th) birthday, Tyrannosaurus rex, and many more! 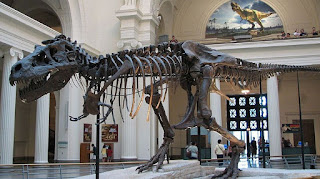 FMNH PR 2081, also know as "Sue", the largest, most complete, best preserved Tyrannosaurus rex ever discovered (who just so happens to be celebrating her 65,500, 010th birthday this year) at the Field Museum in Chicago (photo by Steve Richmond from Wikipedia).
Posted by David Tana at 12:30 PM