The second day of the SVP meeting was even better than the first (and the first was pretty good). The morning consisted of the Romer Prize Session, where predoctoral students present their research and one is selected to receive the Romer Prize for their outstanding contribution in vertebrate paleontology. There were some really great talks this year, covering everything from the phylogenetic relationships of lepospondyls, to cryptocleidoid tail fins, to dinosaur respiratory systems. The competition will be pretty tough this year, and there were a lot of stand out talks, but we'll have to wait until the Awards Ceremony on Wednesday evening to find out who the winner will be.

The afternoon technical sessions focused on mammals, sauropsids, and fish. I spent most of my time in Technical Session VII listening to talks on cruotarsans. Eric Wilberg of the University of Iowa gave a great talk on thalattosucian phylogenetics, followed up by David Dufeau of Ohio University presenting on exaptations and patterns of the archosaurian middle-ear. Susan Drymala over at Crurotarsi: The Forgotten Archosaurs has some great coverage of these talks. Go check it out.

Right after the technical sessions, I was whisked away to the SVP Student and Post-Doctoral Liaison Committee meeting to discuss plans for future meetings, and ways keep in touch with the SVP Student Members. Then it was time to prepare for the upcoming Student Roundtable Forum and Reprint Exchange, as well as try and sell the rest of our tickets for the Student Raffle. With the help of the ever vigilant Kate VanZanten, the night went off without a hitch, and rumor has it more money was raised for the Predoctoral Fellowship Grant than at any previous SVP meeting. Thanks to everyone for making it happen, donators and "Help-asaurus" alike! Here, have some Carnegie Museum photos as a token of my appreciation! 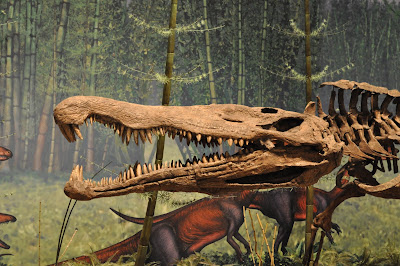 The hardly forgotten Triassic phytosaur, Redondasaurus bermani, greets visitors with a smile as they enter the "Dinosaurs in Their Time" exhibit. 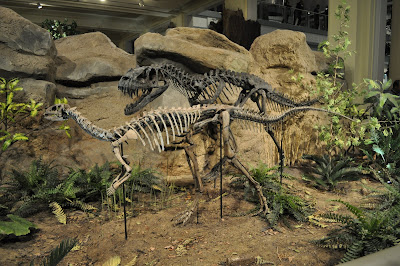 Watch out! Dryosaurus altus has a run in with Ceratosaurus nasicornis as you head into the Jurassic Period. 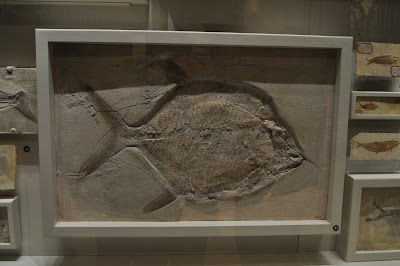 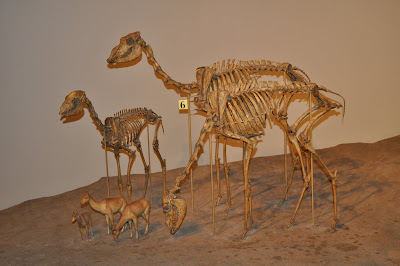