The Road from SVP (Wonders of Fall Part 1.5)

Following an afternoon at the Carnegie Museum of Natural History (which I'll have plenty of more posts on and photos from in the future), we began the journey back to Maryland from Pittsburgh. I can't say that the weather was as nice on the way back as it was on the way up, but there were some highlights. Rather than talk about the same things as I did in my first "fall journey" post, I'll just run you through it, in picture form. 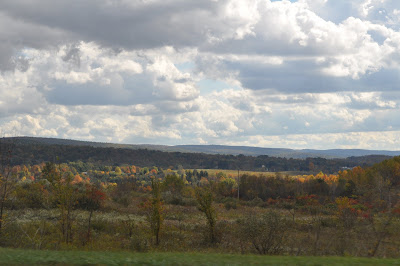 The drive started out pretty well. It was noticeably cooler than it was on the way up, but the Sun managed to peak out from behind the clouds and enhance the view of the fall foliage once again. There were markedly fewer "greens" on the drive home then there were on the way up. The slightest drop in temperature seems to have a lot of impact on the leaves changing color at this elevation. 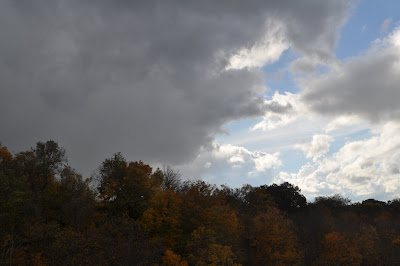 But eventually, the clouds began to roll in. Or rather, we began to roll into them, as the storm that day seemed to stay in the same location as we approached and passed through it. 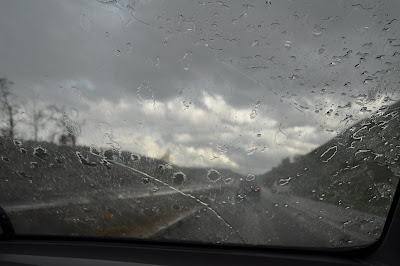 And then, there was rain. Lots of rain. All at once.

After that, it drizzled off and on, keeping me from rolling the windows down to take photos, so a lot of them came out with glare or reflections off of the windows. Unfortunately, this is the only picture of any of the outcrops that I managed to get that didn't come out a blurred mess. 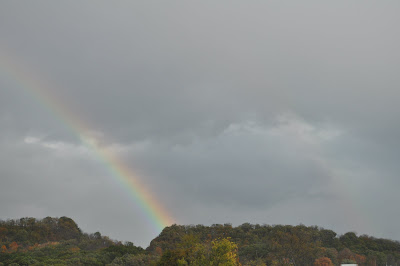 But at the end of the day, the rain was completely worth it, as we were rewarded with a sick double rainbow, all the way across the sky! What does it mean? Well, I can't tell you that, but I can tell you that the semicircular double (or secondary) rainbow forms the same way as a single rainbow. Sunlight reflects inside of raindrops causing the light to refract and appear as colored bands in the sky. These bands of color represent the full spectrum that white light can be broken into, and in the secondary rainbow, the outer, fainter "bow" has inverted colors from the second reflection that occurs. Pretty cool stuff indeed.

And that my friends, officially wraps up my week long post series on the 70th Annual Meeting of the Society of Vertebrate Paleontology. SVP is usually busy, but I did more running around than usual this year. The need to sleep and eat in between functions kept me from blogging as much as I wanted to. So did the fact that wireless access at the convention center and hotel cost an arm and a leg. Thanks to all of the readers and followers who stuck with me through it as I transcribed notes and word documents into posts, and blogged retroactively, despite my promise to "live-blog" throughout the week. Next year, I'll set more reasonable goals. Be sure to check out additional coverage of the meeting at Laelaps, Crurotarsi: The Forgotten Archosaurs, and Dinosaur Tracking (if I left anyone out, please let me know).
Posted by David Tana at 10:00 PM