In Darwin's Footsteps: Field Studies in the Galápagos Archipelago (Part 2) 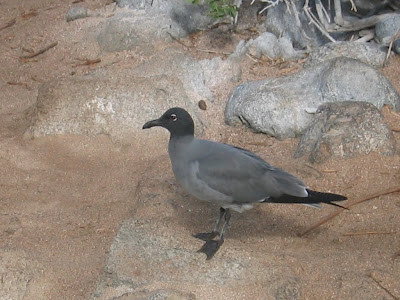 A lava gull at the Lobos Islet of Isla San Cristóbal.

If memory serves me, yesterday I left off discussing speciation events that have occurred in the Galápagos Archipelago. Obviously, there is lots of this going on there. Animals and plants, separated from their traditional breeding population, adapt and evolve to better survive in new environments. The lava gull (Leucophaeus fuliginosus) provides the perfect example. The population of this sea bird is only around 400 pairs, and they only live in the Galápagos. However, on and around Pacific coast of South America, many other closely relates species can be found. The lava gull, being isolated from the rest of the parent population, has evolved into a unique species found nowhere else on Earth. But geographical isolation is not the only driving force behind the evolution of new species in the Galápagos. 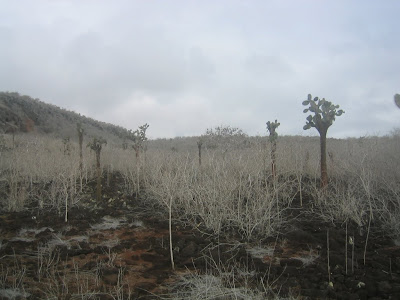 Some species evolve as a result of an evolutionary arms race between producer and consumer, predator and prey. Where one organism evolves a defense, another evolves an offense, and the two, trying to outdo one another, exaggerate certain phenotypic features. Just look at the different species of giant prickly pear cactus (Opuntia spp.) found there. These cacti resemble the cacti found on the mainland in many ways, but some have grown to massive heights as a result of being fed upon by Galápagos land iguanas (Conolophus subcristatus) and Galápagos giant tortoises (Chelonoidis nigra). The tallest of these prickly pears, O. echios gigantea, evolved on the island of Santa Cruz, and can be found in great abundance near Puerto Ayora. They have tall wide trunks, and hard spines covering their pads. Not surprisingly, the island of Santa Cruz has both Conolophus, and its own subspecies of Chelonoidis. The exact opposite can be found on the island of Rábida, where O. galapageia profusa grows. This is a low-growing shrubby variety with soft spines covering its pads that produces large quantities of fruit. And to no surprise, Rábida has never had a population of iguanas or tortoises living on it. It seems that the pressure to be tall and avoid being the lunch of some voracious sauropsid was a very heavy one indeed. 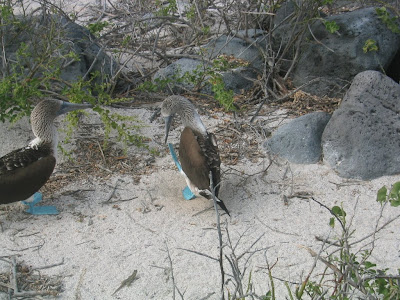 Some fancy footwork from a male blue-footed booby on Isla San Cristóbal.

But it’s not just interspecific pressures that act as a driving force either. Many interactions between males and females of the same species result in the exaggeration of phenotypic features (and behavior) as well. Take for example, the famed blue-footed booby, (Sula nebouxii). On the island of North Seymour, one can find many mating pairs of blue-footed booby, and if lucky, can watch them engage in their rather drawn out courtship display. It centers mainly on their brightly colored blue feet for which they are adored, not only by humans, but by members of the opposite sex. These intense blue feet are the result of sexual selection in the species. The male will show off his feet, lifting them one at a time with head pointed downward, “whistling” at the female. If the female is interested, she will “honk” back at the male. One or both of the pair will then “skypoint”, spreading out their wings and pointing head and tail towards the sky in a display of bravado “honking” or “whistling” all the while. Most often it is the male that begins this behavior, but I saw more than one female engaged in this activity while I was there. If the prospective mate is satisfied with this display, the male will offer the female a gift of a small twig or some grass as a sign of affection, and that he is competent enough to handle the building of a nest, which will house their precious egg. This dance is more elaborate than that of the other two booby species in the Galápagos, and is the direct result of sexual selection. 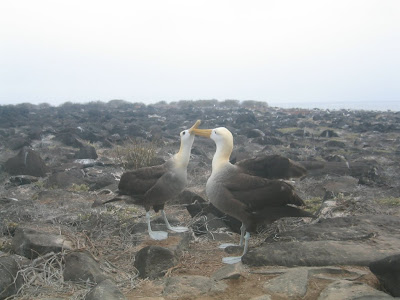 Waved albatross court one another on Isla Española.

Sexual selection acts on other species of sea birds in the Galápagos as well. The waved albatross (Phoebastria irrorata) engages in an equally unique (and elusive) mating ritual. I was lucky enough to catch a pair in the act while visiting the island of Española. This is the primary breeding site for this species, the only diomedeid found in the tropics. It is here that they build their nests on and out of volcanic rocks and the sparse vegetation they can collect. Their courtship involves clacking bills, bowing, and raising their heads to the sky while emitting “whoo hoo” sounds, nearly in unison. Once a pair has come together, they will remain mated for life, lest one of them dies. 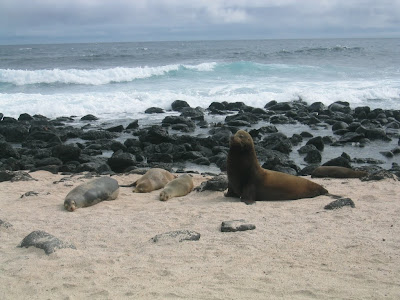 A "beach master" and some of his lady friends at La Loboria on Isla San Cristóbal.

Not all animals in the Galápagos are quite as classically romantic. The bull Galápagos sea lion (Zalophus wollebaeki), for example, takes not one cow as a mate, but as many as he possibly can. This harem is guarded by the “beach master” as they rest on the shore, and he diligently swims from one boundary of his colony to the other. While swimming with the pups is a great deal of fun, the bull will aggressively defend his territory from any interlopers, human or sea lion. And unfortunately for them, they don’t feed while they are performing their masculine duties, so they are often week when challengers approach their 2 km stretch of beach. Ousted males often congregate in “bachelor colonies”, the likes of which can be seen on the cliffs of South Plaza Island. 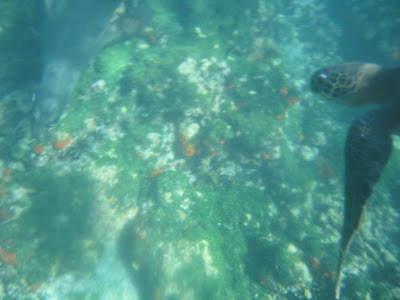 Amniotes of a flipper: a Galápagos sea lion and a green sea turtle swim circles around me off the shore of Isla Santa Fé.

Male Galápagos giant tortoise also engage in dominance displays, meeting face to face, standing tall, and stretching their necks out, mouths agape, to determine who is the bigger guy. The victor, equipped with a concave plastron with knobs on the posterior margins, then begins to court the female by ramming her shell and biting at her legs. Then it is onto the arduous task of mounting her. He can weigh up up to 180 kg more than she, and she may not like it, but he isn’t deterred. The shape of his plastron helps him maintain his position on her shell as he emits grunts and bellowing noises you would never expect to hear coming out of a chelonian. 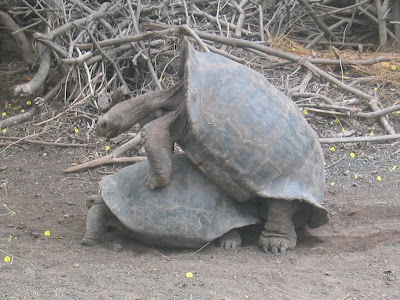 Obligatory photo of Chelonoidis nigra chathamensis mating at a breeding center on Isla Isabela. If only I had an audio clip to go along with it.

As aggressive of a mating strategy as that seems, things get considerably raunchier for other Galápagos species, Take for example, the so deemed “rape” of female Conolophus by male Marine Iguanas (Amblyrhynchus cristatus) on the island of South Plazas. It is known by Galápagos naturalists that at least three, presumably sterile hybrid iguanas live on the island, and are the result of the interbreeding of the two species. This occurs on South Plazas, because, unlike anywhere else in the Galápagos, the land and marine iguanas are both in heat at the same time on this island. The male Amblyrhynchus will mount and fertilize a female Conolophus, and the resulting offspring will have the long round tail of the land mother, and the short snout and sharp claws of the marine father. It lives near the sea and feed on cactus pads and seaweed like both of its parents. This hybridization is only able to occur because the two species share a common ancestor, one that the hybrid iguana probably resembles. Conolophus and Amblyrhynchus are each other closest living relatives, having diverged from one another around 17 Ma. Quite a thing to see for any squamate lover. 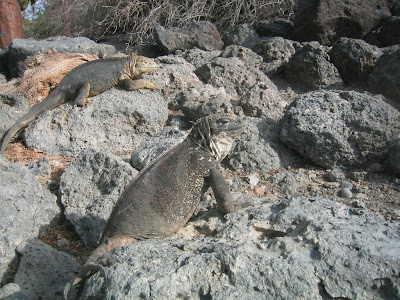 A hybrid iguana (foreground) hangs out with a land iguana (background) on Isla Plaza Sur.

In the interest of getting this post up before today turns into tomorrow, I think I’ll end here for now. But I still have a bit to say, so it looks like you all are in for a three parter. I’ll try to have the conclusion to this series, and some more photos on my Flickr stream, up by Sunday for the official end of Darwin Week. 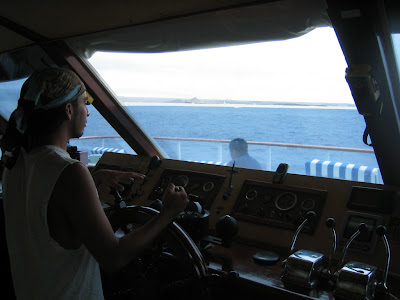 Setting sail for adventure on the Millennium.
Posted by David Tana at 11:50 PM