Fossils, the Beagle, and Backyard Osteology

Yesterday, Superoceras kicked off Darwin Week with a fantastic guest post from Dr. Tom Holtz on what everyone should know about paleontology. I think he did a wonderful job of sewing together the threads of Earth, Life, and Time to show why the study of fossils is not only relevant to learning about our collective past, but is important for emphasizing our common future as well. The importance of fossils was not lost on Darwin, and while most people tend to associate him and his theory with places like the Galápagos Islands, and animals like finches, during his voyage on the HMS Beagle, he was also quite the fossil collector. While traveling South America, Darwin collected fossils of many extinct mammals that would later go on to be described by Sir Richard Owen including Toxodon platensis, Macrauchenia patagonica, Mylodon darwini, Equus curdivens, Glossotherium sp., and Scelidotherium leptocephalum (Fernicola et al. 2009). Darwin, a man who was very good at connecting the dots, used his understanding of geology and natural history to identify these organisms as having had existed at some time in the past, and having gone extinct. This was one of the many observations he used when formulating his theory of evolution by natural selection.

As romantic as fossil collecting and sailing around the globe is (and as jealous as I am of Chucky Dee), you don't have to go too far to make discoveries of your own. In fact, my friends Matt and Sara made just such a discovery recently in their own backyard. They are new property owners who have had construction crews working and turning over large portions of their yard. My "assistant archaeologist" Joe was quick to call me as soon as he heard about what they had found. 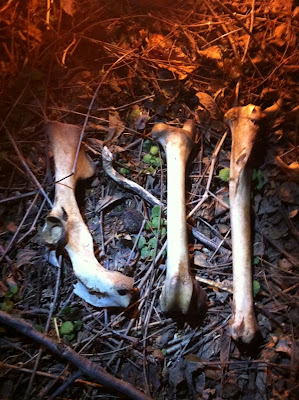 A creepy late night trip later, and I'm a spooky photo and three skeletal elements richer. The bones in the photo above were found under a thin cover of leaf litter, completely exposed, and were only moved into the current orientation for the picture. The largest of the three is around 0.3 meters. In the spirit of Darwinian discovery, I won't reveal their identity just yet (assuming I'm correct in my identification in the first place). I'll let my readers take a guess at determining which bones these are, and what kind of animal they come from first. I'll give you two hints: they are not human, and they are not fossils. Post a comment, e-mail me, or respond via Twitter if you like. And check back to this post in the near future for the big reveal.