"He says no one's gonna fancy a girl with thighs the size of big tree trunks."

Well that's certainly not true if the interest the media is taking in this lovely lady* is any indication. Meet Brontomerus mcintoshi, a new sauropod from Early Cretaceous of Utah.
*Note: there is no mention that any of the specimens of Brontomerus are in fact female, but I'm going to pretend it's a girl for the sake of title quote. 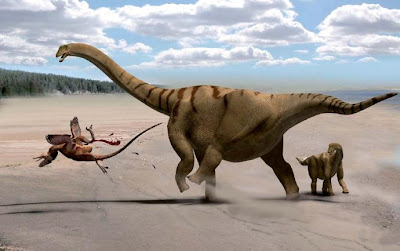 Speculative life restoration of an adult (female) Brontomerus mcintoshi defending its young from a Utahraptor. Executed by Francisco Gascó under direction from Taylor and Wedel, from Taylor et al. 2011.
In a paper published today in Acta Palaeontologica Polonica, Michael Taylor, Mathew Wedel (both of Sauropod Vertabra Picture of the Week) and Richard Cifelli introduce us to "thunder-thighs", one of the many sauropods recently discovered in Cretaceous rocks that helps disprove the long held theory that sauropods disappeared at the end of the Jurassic Period. She's a real beauty, as the figures, photographs, reconstructions and restorations in the paper show. I particularly like the Mad Men-esque scale reference they use in their skeletal inventory. So classy. The paper itself is also brilliantly written - good science at its very best. That means there's lots more to say about this newly described dinosaur. But as I'm generally late to the party with these things, the paleo-blogosphere has already done a pretty good job of covering the details. You can find more information on Brontomerus at SVPoW, Dinosaur Tracking, Dave Hone's Archosaur Musings, Love in the Time of Chasmosaurus, Everything Dinosaur, and the brand new Paleo Illustrata.
References
Taylor, M.P., Wedel, M.J., and Cifelli, R.L. 2011. A new sauropod dinosaur from the Lower Cretaceous Cedar Mountain Formation, Utah, USA. Acta Palaeontologica Polonica 56 (1): 75-98 doi:10.4202/app.2010.007
Posted by David Tana at 3:00 PM