Guest Cross-Post: "What Should Everyone Know About Paleontology?", by Dr. Thomas R. Holtz, Jr.

As the third annual Darwin Week begins, it's a great day for paleontology, and for Superoceras as well. After a recent question was posed to the Dinosaur Mailing List, a discussion commenced regarding the most important facts and theories for the general public surrounding paleontology. Luckily for all of us, Dr. Thomas Holtz was there to step up to the plate, and present one of the most comprehensive lists on the subject I've ever seen. Paleontology is a very diverse field with an immensely wide scope, and to be perfectly honest, it doesn't always see the respect it deserves when it comes to media portrayal of the subject. Which is why the following information is of the utmost importance to anyone who wants to get to the real heart of the matter. But you don't need me to tell you that - Dr. Holtz has done a fantastic job of that himself. In the spirit of Charles Darwin, I proudly present the first Superoceras guest post. Thanks for letting me be a part of the dialog, Dr. Holtz! 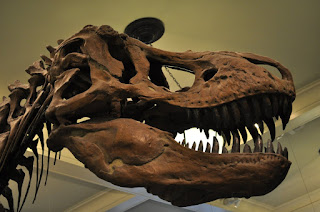 Tyrannosaurus rex at the American Museum of natural History in New York.

“What Should Everyone Know About Paleontology?”

I think that is a good question. What really are the most important elements of paleontology that the general public should understand? I took a shot at coming up with a list of key concepts, based on experiences with teaching paleontology and historical geology and with less-formally structured outreach to the public. I have offered this list (cross posted at the Sauropod Vertebrae Picture of the Week, Dave Hone's Archosaur Musings, Crurotarsi: The Forgotten Archosaurs, and Superoceras blogs) as a way for it to reach a wider audience. That this is Darwin Week makes it even more appropriate, as we should use this occasion to encourage a better understanding of the changes of Earth and Life through Time for the public at large.

Much as I might like to think otherwise, the specific details of the hindlimb function of Tyrannosaurus rex or the pneumatic features of brachiosaurid vertebrae really are not the most important elements of the field. Understanding and appreciating the nitty gritty details of the phylogeny and anatomy of any particular branch of the Tree of Life are not really necessary for everyone to know, any more than we would regard detailed knowledge of bacterial biochemistry or the partitioning of minerals in a magma chamber to be significant general knowledge. (Indeed, these latter two items are actually far more critical for human society than any specific aspect of paleontology, and so from a certain point of view really more important for people to know than the History of Life.)

That said, all human societies and many individuals have wondered about where we have come from and how the world came to be the way it is. This is, in my opinion, the greatest contribution of paleontology: it gives us the Story of Earth and Life, and especially our own story.

I have divided this list into two sections. The first is a list of general topics of paleontology, touching on the main elements of geology that someone would need to know for fossils to make any sense. The second is the more specific list of key points in the history of life.

(NOTE: as the idea of this list is that it should be aimed at the general public, I have tried to avoid technical terminology where possible.)

Honestly, despite the fact the specific issues about specific parts of the Tree of Life are the ones that paleontologists, the news media, the average citizen, etc., are more concerned with, they really are much less significant for the general public to know than the points above. Sadly, documentary companies and the like keep on forgetting that, and keep on forgetting that a lot of the public does not know the above points.

Really, in the big picture, the distinction between dinosaurs, pterosaurs, and crurotarsans are trivialities compared to a basic understanding that the fossil record is our document of Life’s history and Earth’s changes.

Summarizing the key points of the history of life over nearly 4 billion years of evolutionary history is a big task. After all, there is a tendency to focus on the spectacular and sensationalized rather than the ordinary and humdrum. As Stephen Jay Gould and others often remarked, from a purely objective external standpoint we have always lived in the Age of Bacteria, and the changing panoply of animals and plants during the last half-billion years have only been superficial changes.

But the question wasn’t “what should a dispassionate outsider regard as the modal aspect of the History of Life?”; it was “What should everyone know about paleontology?” Since we are terrestrial mammals of the latest Cenozoic, we have a natural interest in events on the land and during the most recent parts of Earth History. That is a fair bias: it does focus on who WE are and where WE come from.

That said, here is a list of key concepts in the history of life. Other researchers might pick other moments, and not include some that I have here. Still, I believe most such lists would have many of the same key points within them.

This list is obviously not comprehensive, and there are many elements that I had to ignore to keep it relatively short. Still, I hope this overview helps put where we as a species fit into the larger perspective of Life’s long voyage, a voyage that could only have been traced by the study of fossils.