Wow. I've gotten notoriously bad at starting post series here at Superoceras and never finishing them. Sorry guys and gals. I think I'll go ahead and spend the week catching up on all the things I need to finish, and then get into some more new material. Let's go ahead and look back a few months to when I started a series on color in (non-avian) dinosaurs.
In the first post, I talked about "Dakota" the mummified Edmontosaurus, and the traces of what appeared to be pigment patterns on the fossilized skin of the arm and tail. In the second, I talked about feathers and feather-like structures in three dinosaurs, and how researchers were able to determine the coloration of the feathers on certain parts of the body in Sinosauropteryx by looking at fossilized melanosomes (pigment containing cells) and comparing them to those found in modern birds. Fascinating stuff, but it only gets better from there.
Anchiornis, Huxley's "near bird"

Figure 4 from the Science article reconstructing plumage color in Anchiornis, color plate by M. A. DiGiorgio.
I want to round off this series today with a little theropod from the Late Jurassic of China who, despite its somewhat recent discovery, has had a makeover several times already. Anchiornis huxleyi was first described in the Chinese Science Bulletin back in 2009. The type specimen was missing the head, part of the tail, and the front right 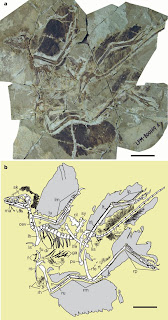 limb, and was assigned to the clade Aviale which contains birds and the closest immediate relatives of birds (Xu et al. 2009). So right off the bat, it's decided that this animal is more closely related to birds than it is to other non-avian dinosaurs. Later that year, a new specimen was described in Nature that did have the head attached (Figure 2 from Nature article at right, showing photo and line drawing of specimen of Anchiornis). This head was covered in a feathered crest, and more feathers were preserved on both the front and hind limbs (Hu et al. 2009). Because this specimen was more complete than the last, more character traits were revealed that changed the placement of Anchiornis on the family tree. It was determined that Anchiornis was a troodontid, a group of dinosaurs that was more closely related to the dromaeosaurids than to birds after all (Hu et al. 2009).
But there is more to the story. A week after the Nature publication on Sinosauropteryx, a paper came out in the journal Science that described a third specimen of Anchiornis. Using the same technique, the team of researchers examined feathers from the specimen under a scanning electron microscope to look at the shape and size of melanosomes. Only this time instead of patches of color on various parts of the body, Li et al. were able to describe and map the plumage color on the entire body of the animal (2010). The described an animal with a dark gray body, white wing feathers with black "spangles" on the distal ends, and a rufous crown and speckles on the face (Li et al. 2010). For the first time in the history of paleontology, we were able to look back and see what one of these long extinct dinosaurs looked like in life without any speculation. That's truly beautiful if you ask me, and it almost brings a tear to my eye thinking about it.
The reconstruction you see above is as good as it gets. And while this is a monumental first in the history of paleontology, I have no doubts whatsoever that more and more dinosaur specimens with preserved feathers will have there true colors revealed in the future. And when they do, you can bet you'll be able to read about it here. But for now, I think that about wraps up my post series on dinosaur color.
References
Xu, X., Zhao, Q., Norell, M., Sullivan, C., Hone, D., Erickson, G., Wang, X., Han, F., & Guo, Y. 2009. A new feathered maniraptoran dinosaur fossil that fills a morphological gap in avian origin. Chinese Science Bulletin, 54, 430-435.
Hu, D., Hou, L., Zhang, L., & Xu, X. 2009. A pre-Archaeopteryx troodontid theropod from China with long feathers on the metatarsus. Nature, 461 (7264), 640-643.
Li, Q., Gao, K.-Q., Vinther, J., Shawkey, M. D., Clarke, J. A., D'Alba, L., Meng, Q., Briggs, D. E. G., & Prum, R. O. 2010. Plumage color patterns of an extinct dinosaur. Science, 327 (5971), 1369-1372.
Posted by David Tana at 3:25 PM