WARNING: The following post contains little science, and lots of "touchy-feely" stuff, but I'm putting it out there anyway. Consider yourself warned.

I will never forget the day of my college orientation. I had been invited to join the College Park Scholars, and had selected the "Earth, Life, and Time" program as my focus. Walking into the basement classroom of one of the imposing University buildings, I took my seat with all the other "ELT" scholars in front of two gentlemen who would, over the course of the next few years, change the way I looked at everything. They introduced themselves as co-directors of the program, said that they were vertebrate paleontologists, and that was pretty much the last thing I remember. There is a definite possibility I blacked out; I was immediately swept up by a whirlwind of excitement and anticipation.

It may seem a bit childish, but despite my lifelong fascination with all things "prehistoric", I had never met a paleontologist before, let alone had the opportunity to be educated by one. And I was getting two! For six long years they mentored and taught me as I bounced between colleges and grade point averages. I supplemented my "ELT" colloquium with their other courses, learning about historical geology, dinosaurs, patterns and enigmas in vertebrate evolution, paleontology, and so much more. I was lucky enough to travel with them as well, visiting the Gálapagos Islands and the "Grand Canyon State" in addition to local fossil sites, road cuts, and museums. Never had I met two individuals so enthusiastic about their work or dedicated to their students.

I got my Scholars citation, and eventually my college diploma, and went out into the world. And to this day, these two gentlemen paleontologists are still encouraging me to peruse my scholarly endeavors and lending a helping hand where they can. They partially inspired my blogging here at Superoceras, and even had a hand in establishing the name itself. And despite the fact that the program is now extinct, they are still acting on my behalf, providing exposure for the blog. They really do go above and beyond. As my fellow Scholar Susan said, they are certainly worthy of praise.  And I credit them not only for the knowledge they've instilled in me, but the work they have done over the years. I'm sure the other "ELT-ers" out there would agree with me when I say it was with great sadness that the program came to and end after ten wonderful years. It lives on in the form of a new program, "Science and Global Change", with the same directors. But anyone who's anyone will tell you it's just not the same. So I'll do my best to preserve the legacy of both the program, and it's directors; your work will not be forgotten! I'd like to give a big thank you and shout out to Dr. John W. Merck, Jr. and Dr. Thomas R. Holtz, Jr. This one's for you guys! 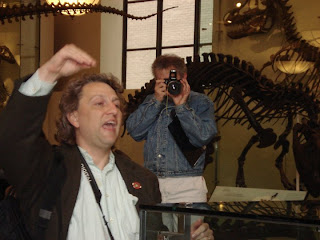 Dr. Holtz (foreground) and Dr. Merck (background), doing what they do at the AMNH. Photo courtesy of Sara Sherman.

**UPDATE 07 SEPTEMBER**
Big thanks go out to Dave Orr, who was kind enough to link to this post in the inaugural paleo-carnival for The Boneyard 2.0. Check it out over at Love in the Time of Chasmosaurus here.
Posted by David Tana at 9:00 AM