Understanding the "Tree of Life"

A friend of mine (who can take credit for these posts in the form of a response, should he like to be recognized) recently asked me a question regarding the newly discovered hominid Ardipithecus ramidus, and the scientist who claims that "apes descended from humans". This immediately set off a number of alarms in my head, not in response to his asking the question, but in response to what I think are two issues facing science and scientists today: the lack of proper scientific literacy and education in the United States, and the role and influence that the media has when presenting scientific information to the public. These are both topics that have been brought up recently on the vertebrate paleontology mailing list, and while I didn't chime in there, I figure this is as good a place as any to speak up. This will be the first post in a series that I hope will shed some light on these issues, and help reach those who have questions similar to those of my friend. So let's get right down to business.

First of all, we need to talk about word use. Saying that "apes descended from humans" or "humans descended from apes" for that matter, is simply not a correct reflection of how most scientists view or communicate modern concepts of evolutionary theory. No one is saying that a chimpanzee (I imagine that is the organism most people are referring to when they say "ape") is your ancestor, or that you are the ancestor of a chimpanzee. In reality, we are more like cousins if you want to use the family analogy. But we'll get to that later. The point is, there is a problem with the language being used. Even in the definition of the word "ape" (we'll get to that in a minute too).

Language aside, there is still the issue of understanding. Specifically, what you understand about the phrase "apes descended from humans" when you speak the words, and what you understand about how evolution works in general. Now I'll be perfectly honest with you. No one knows all of the mechanisms at play in the evolutionary process. Not even Charles Darwin himself understood it completely, and he struggled with that while working on "On the Origin of Species". But through observation and experimentation, he came up with a pretty good working theory that modern scientists have tested and contributed to the understanding of for almost 150 years now.

That being said, let's get back to that whole "ape" thing. Chimpanzees and humans are both apes. I'll say it again. You are an ape. A chimpanzee is an ape. "How is this possible? I thought I was a human.", you might say. And in response to that I would tell you, "Why certainly you are human, and a chimpanzee is a chimpanzee. But you are both apes!". Just like a dog is a dog, and a wolf is a wolf, but both are canines. Let's explore this concept.

Now I'm about to get a little technical here, so please bear with me. When classifying organisms (called terminal taxa for the purposes of this exercise) we can place them in groups (called clades) based on similarities (called character traits). We can then place those groups into larger groups, and so on, and so on. We can even see where these organisms or groups split from other organisms or groups at junctions (called nodes) between them. When you put all of this information in a graphical context, you get something that looks a little bit like the branch of a tree. Here, let me show you.

(Click on the image below and the ones that follow for enlarged, easier to view versions. I apologize for this inconvenience until I get proficient enough at making really awesome images in a program that is not MS Paint.) 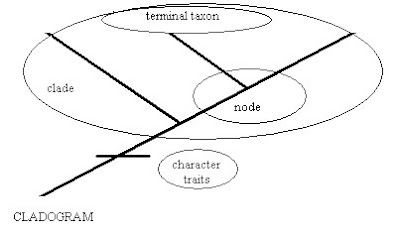 That is the basic structure of what scientists call a cladogram. It is a way to gather and organize information about the relationships of living things on Earth. And if you know how to read a cladogram, you are one step closer to being able to understand those relationships. Using character traits that terminal taxa share, we can group them together in their proper clades and see the nodes at which they split from other clades or terminal taxa. Let's go back to that dog-wolf example for a minute and see how we can use this system practically.

Looking at this cladogram, we can see the relationships of a few different animals alive on Earth today. We can see that all of the animals are part of a group called vertebrates, united in this clade by the presence of a backbone (among other things). Within the vertebrates, we find mammals, united by their character traits; within mammals, we find carnivores; within carnivores, caniformes ("dog-like" forms); and within caniformes, true canines. We see groups nested within groups, similar in some ways to a typical Venn diagram you may already be familiar with. If you weren't already convinced that dogs and wolves were both canines, or that mice and lions were both mammals, hopefully looking at things this way helps you see that they all are. And I think you'd be hard pressed to find a lot of people that would disagree about these relationships. Now, using the same terminology, I can also show you that you are an ape, a point which many more people are likely to argue against.

This cladogram is nearly identical to the one above it. I've just changed the terminal taxa, character traits, and clade names. Here we see the same nested structure, and if you look closely, you see that both humans and chimpanzees fall within the ape clade, and therefore are both apes. We are both the descendants of a shared common ancestor, and over the last few million years we have evolved into two unique species. I know that this is an idea that many may find opposition to. Humans are prone to think that we are not animals, or that we are better than other animals. And I'm not denying that we are unique and special in our own way. But we are also a part of something bigger, and that's just as important to realize. That something bigger is the "Tree of Life". To go back to the family analogy I mentioned earlier, every living thing on Earth is part of the same family, the family of "Life on Earth". Just like the "Smith" family or the "Jones" family, we can trace our roots backwards through time on our family tree to see our common ancestry, who we are related to, and how distant or close that relationship is.

Let me also say on that note that it is important realize that we are not "more evolved" than chimpanzees, as I hear that phrase being thrown around a lot too. There is no hierarchy to the evolutionary process. That's why it's a "Tree of Life" and not a "Ladder of Life". Both humans and chimpanzees have been evolving from the most recent common ancestor (or concestor) of the ape clade for an equal amount of time. We have just evolved to different ends as the result of natural selection through descent with modification. Humans and chimpanzees as we know them today evolved in response to ecological and environmental changes that they had to adapt to, just like birds and bees and every other living thing on Earth. All are unique. All are "equally evolved". All share a common ancestor somewhere down the cladogram. We're all just different from one another. And while these differences do make us all unique and special in our own way, no living thing you find on the planet today is "more evolved" than another.

The theory of evolution doesn't say that "we evolved from apes" or that "apes evolved from us". Unless by "ape" you are specifically referring to our common ape ancestor that gave rise to both humans and chimpanzees (a hypothetical organism that lived in the distant past, and can be found on the node of the ape clade) and not a modern non-human ape. But I imagine that people that make this statement are not talking about this organism. I also imagine that people that make this statement aren't attempting to be malicious (with certain exceptions), but rather make it because they don't have a proper understanding of the terms or science related to evolutionary theory. Without a proper foundation, it's just a lot of people waving their arms and saying things they don't understand. And that can be on both sides of conversation. I think that as human beings, unique among the apes, we owe it to ourselves to be as informed as possible about the subject as we can before we jump into a discussion about it.

I hope this post will help some people in that regard. My only intention is to help communicate the proper information so that people know what they are discussing when they talk about evolution. Talking about things you don't necessarily understand or spreading false information on the subject isn't helping anyone, whether intentional or not. I also hope that this post helps people understand the relationships we share with other organisms on the "Tree of Life" (even though when you look at all the branches and organisms, it becomes more bush-like than tree-like). Being aware of these relationships makes me feel more connected to the world around me, and I hope it does the same for you, as that connectedness is essential in ensuring the long term survival of our species, as well as all species on Earth.

More to come in this series on science, education, and the media. And if you made it all the way down here, a special "thanks" goes out to you for being able to tolerate my ramblings. Feel free to ramble back, and I'll try not to disappoint in the future.
Posted by David Tana at 11:35 AM