On the Origin of Species by Means of Natural Selection, or the Preservation of Favoured Races in the Struggle for Life

On this day 150 years ago, Charles Darwin, FRS published his groundbreaking work On the Origin of Species. It still stands as one of the most important texts in the history of science. In its pages, Darwin wrote of the observations he made in the natural world around him, and theorized that all living things on Earth were constantly changing generation after generation through the process of natural selection. Through a combination of fact and inference, Darwin was able to envision the interconnectedness of life’s diverse forms and come up with a comprehensive theory that would shape the way we view the living world. 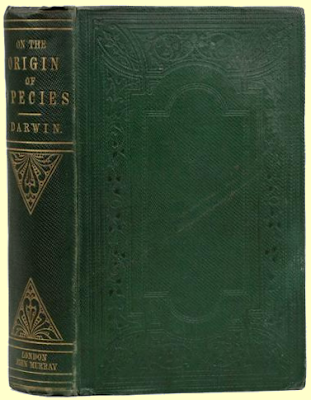 Image of On the Origin of Species by Means of Natural Selection, or the
Preservation of Favoured Races in the Struggle for Life by Charles Darwin,
first edition. Reproduced with permission from John van Wyhe ed.,
The Complete Work of Charles Darwin Online (http://darwin-online.org.uk/)
It was “from so simple a beginning” that Charles Robert Darwin (who had his 200th birthday on the 12 February, 2009) rose to scientific recognition. Born in Shropshire, England, from a very young age he showed an interest in natural history. This would go on to serve him well when he went to study medicine at the University of Edinburgh in 1825. But he found lectures boring, and instead of studying, he learned taxidermy and spent much of his time collecting and cataloging specimens. He worked on many different things during this period of his life, from the anatomy and ecology of marine invertebrates, to the classification of plants, before his father got upset with his lack of interest in medicine and sent him to Christ’s College in Cambridge in 1828 to become an Anglican parson. Instead of studying there, he collected beetles and hunted. Despite this, he passed his final examination tenth in his class.
The summer after his exams, while still at Cambridge, he studied geology and learned to map strata. He was also friend and student of John Stevens Henslow, who would eventually recommend Darwin for the captain’s companion/naturalist position aboard the HMS Beagle. Darwin would accompany captain Robert FitzRoy on the ships voyage around the South American coast for almost five years, surveying the coastlines of the continent, making geological observations, and collecting biological specimens. He discovered the fossils of previously unknown mammals that had recently gone extinct, and read Charles Lyell’s Principles of Geology. In this book, Lyell stressed that “the present was the key to the past”, and that processes of geology are bound by the same natural laws today that bound them previously in Earth’s history. This helped Darwin understand the concepts of deep time, and how in it, mountains could rise and fall, and marine fossils could end up on their highest peaks. He would later apply these principles to living things as well as geological features.
It was on this voyage of the Beagle that Darwin visited the Gálapagos Islands off the coast of Ecuador. It was here in the shells of tortoises and the beaks of finches that he observed slight variations in the populations on different islands in the archipelago. He also noticed the similarity between organism on the islands and those from the mainland, questioning why and how such unique species came into being. He brought many of these specimens of these animals (as well as plants) back to England when he returned in 1836, and immediately caught the attention of individuals like Sir Richard Owen, who would go on to describe the fossil specimens that Darwin collected, and later in life oppose Darwin’s theory of descent with modification. Many of his bird specimens were examined by ornithologist John Gould, who identified the “blackbirds”, “flycatchers”, “werns” and “gros-beaks” Darwin had collected as 13 unique species of finch. Gould also identified the mockingbirds Darwin brought back as unique species, rather than variations found on different islands. As more and more of these discoveries came to light, Darwin started to formulate ideas about his “species theory”. He could not understand why similar but different species of birds would exist on islands so close to one another, and began to hypothesize that one population, geographically isolated from one another, would “transmutate”, or change gradually over time. By March of 1837, he had started keeping notebooks of his ideas, and by that summer, was rejecting Jean-Baptiste Lamarck’s idea that there was a hierarchy or order to living things. Instead, he thought of life as more of a genealogy; a tree that had a single point of origin and continued to branch out generation after generation. This was a controversial idea at the time, because this would mean that all living things, including humans, came from a common ancestor. This went against certain values of the time that taught that all organisms had been specially created and were fixed throughout time, man among them representing the most perfect creation of all. The idea of change over generations and extinction went against the views of many, and Darwin was fully aware of the controversy his theory would bring.
He continued to work on his theory, among other things, for many years. He married Emma Wedgwood in the winter of 1839, and they had 10 children over the course of 17 years. Two died in infancy, and his daughter Anne died in 1851 shortly after her tenth birthday. He loved his children dearly and blamed himself for the illnesses they suffered. He believed them to have inherited weaknesses from his union with Emma, who happened to be his first cousin. This was a topic that he discussed in his writings as well. Darwin himself often suffered from heart trouble, stomach problems, and headaches, often brought on by stress, and treated with little to no success. He had also suffered sea sickness while on board the Beagle, and found that one of the only things that would leave him fully rested and recuperated was exploring the natural world. He did this quite frequently, exploring the area around his home, Down House, in Kent, England.
But throughout this dark period in his life, he continued to work on his theory. In 1857, around 20 years after he began drafting his thoughts, Darwin sent an outline of his book, then titled Natural Selection, to American botanist Asa Gray. Years of making observations about the anatomy of barnacles, experimenting with plants in his greenhouse, and breeding pigeons had helped him establish enough evidence that to build a framework for his theory. This resulted in a nearly complete sketch of his work. But time after time, he had been stalled in its publication because more and more questions, increasingly difficult to answer, had been posed by his research. But this would soon change. In June of 1858, Darwin received a paper from a contemporary and correspondent of his, Alfred Russel Wallace. Wallace’s paper startled Darwin, as in it, he saw many similarities with the “big book” on species which he had been writing. Not wanting to have his life’s work be in vain, he was pressured by some of his close friends to complete his theory and publish his book as quickly as possible. His hand forced, a joint presentation of Wallace’s paper and Darwin’s outline took place at the Linnean Society in July of that year.
Initially, there was not much response to Darwin’s work. Most considered it unremarkable. But on the 24th of November, 1859, the 1,250 first editions of the completed On the Origin of Species by Means of Natural Selection sold out immediately. It was light on scientific terminology, and reached a large public audience as well as those in the scientific community. The success of the publication was followed by years of both criticism and support from his peers and colleagues. The years of anxiety that Darwin suffered regarding the publication of his theory were not in vain, and today still, there are those that completely denounce the work as heretical rhetoric. But in reality, it is elegant presentation of logical thought that is just as relevant in the modern world as it was in 1859. In the book, Darwin simply stated that in the “struggle for existence”, the forces of nature would select individuals that exhibited traits beneficial for their survival, and over time, these traits would accumulate causing new species to arise. In its conclusion, he wrote,

"There is grandeur in this view of life, with its several powers, having been originally breathed into a few forms or into one; and that, whilst this planet has gone cycling on according to the fixed law of gravity, from so simple a beginning endless forms most beautiful and most wonderful have been, and are being, evolved." (Darwin, 1859)

Today, modern genetics and molecular biology are proving what Darwin theorized 150 years ago: that all life on Earth is related, and has a common origin. His revolutionary insight has changed the way we view our place in the natural world, and helped advance our understanding of science. We understand how species rise and fall; how whales could come from terrestrial animals; how birds first left their saurian roots and took to the skies; even how our ape ancestors left the trees and began walking upright on the savanna. Most importantly, he showed us that, like all other organisms, we are subject to the same natural laws that guide the shaping of living things on this planet, and therefore do not have dominion over life, but are a part of it. I don't know about you, but I particularly agree with that line of thought, and kind of think Darwin was amazing (as you can tell by the lengthy nature of this post). Today should be a day of celebration and remembrance for a most humble man with a most exceptional theory, and the book that changed everything we know about who we are and where we came from.
More on Charles Darwin, and his writings can be found at "The Complete Work of Charles Darwin Online", at http://darwin-online.org.uk/
Happy "Origin" Day, everyone! 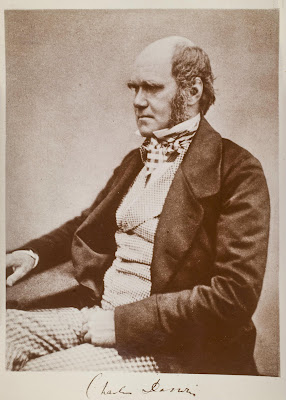 Darwin, C. 1859. On the Origin of Species by Means of Natural Selection, or the Preservation of Favoured Races in the Struggle for Life. John Murray, London.