Well, this is long overdue.

A while back, I posted an image on the blog of a few skeletal elements that had been found in the backyard of some friends of mine, and posed a challenge to my readers to try and identify them. About a month has passed, and they are still sitting out on the deck, uncleaned, judging me every day as I walk past them to go work on other things. But I do think it's about time that I get around to talking about them a bit more, describing the process I went through in identifying them, and telling you what animal I believe they came from. 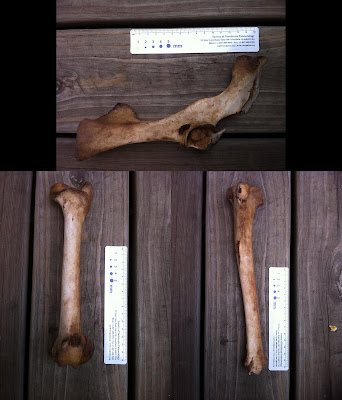 When my friends called me, they were a little creeped out that these bones would just be lying about, unexposed, in a neighborhood backyard. After quickly calming their nerves and assuring them that they were not human remains, I started looking into alternative hypotheses. As you can (maybe) see in these pictures, they aren't particularly large, and they seem to come from an older animal. The ends of the long bones show signs of epiphyseal closure and a decent amount of "wear and tear" that comes with age. The bones were mammalian, and given the region where they were discovered, that limited my options as to what they belonged to. They were too large to belong to a raccoon, opossum, or fox. And I thought, too small to belong to a white-tailed deer.

My initial reaction, upon reassembling the elements on that dark spooky night, was that they had to come from an animal that was somewhere in between the size range of the animals mentioned above. A juvenile white-tailed deer was my first thought, but the bones seemed to have come from an older individual, so I quickly abandoned that line of thinking. Coyotes are known to have made it as far east Cecil County, Maryland. But I thought the the odds of finding a partial coyote skeleton in the backyard of a Mount Rainier home would be slim. The most parsimonious explanation I could come up with was that they belonged to a large, domestic dog. Perhaps it was a family pet that was buried in the yard. Something around the size of a German shepherd. But that didn't quite sit right either, as the bones were found exposed on the surface, and if an entire animal had been there, the remainder of the skeleton would have been easily found in the vicinity. 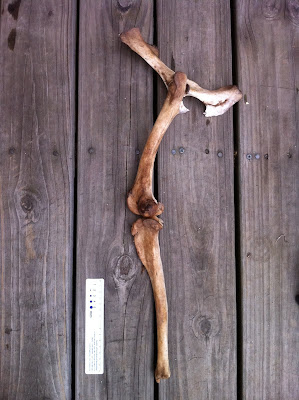 While the bones sat, my thoughts on them kept rattling around in my head. I had convinced myself that, logically, they had to belong to a dog. But in actuality, that wasn't logical at all. I had only looked at them once, in the dark, for about 5 minutes. That's not good science! I needed to get my hands dirty (literally), see if I could falsify my hypothesis. I needed to examine the bones. Now, I'm not a proper anatomist, but I've spent a decent amount of time studying and comparing the bones of different vertebrates in museum collections and in the literature. And it only took a quick look at the pelvis to notice a few things that made the "not dog" alarms in my head go off.

The pelvis itself is made up of three fused bones - the ilium, ischium, and pubis. To me, it seemed like the whole element was not robust enough to have come from a dog. And despite how narrow the canine pelvis is compared to a human, this one was a bit too narrow to fit the bill. The real deal breaker for me was the shape of the ilium. Dogs typically have a more rounded iliac crest than the one present on the "mystery pelvis". This one was more angular, and had ridges and "folds" as opposed to a smooth, curved surface. Another point of curiosity was the ischiatic tuberosity, which serves as an attachment point for the sacrotuberal ligament to connect the ischium to the sacrum and the first (few in some cases) caudal vertebra. In dogs, it is typically a narrow projection off of the ischium, as the ligament it supports is narrow and cordlike. This one reminded me more of an "ungulate", where the tubersity is broader to accommodate a broader ligament. 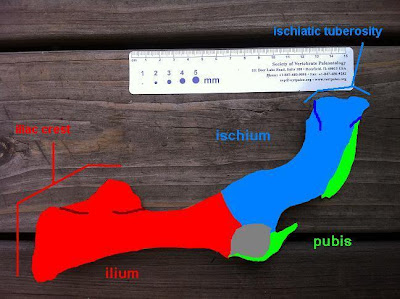 Anatomy of a pelvis, the phenomenal result of make figures in MS Paint during your lunch break.

The features of the pelvis alone made it pretty clear that I wasn't looking at the bones of a dog. Reevaluating the situation, I started thinking of white-tailed deer again. All the evidence supported this identification, yet for some reason, I had abandoned it early on in my investigation. Why? Looking back to that first night, I had convinced myself that the limb was too small to come from an adult deer. This was the direct result of a crucial, silly mistake on my part: I was looking at the bones from an anthropocentric point of view. Immediately upon seeing the bones, I started comparing them to the bones of a human being. Now of course, all tetrapod hind limbs are homologous, and share similar structures. But there are important differences as well. One of the most important is the form, function, and arrangement of bones below the ankle. Let me show you what I mean. 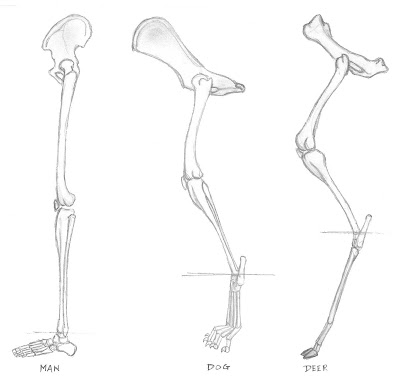 The skeletal anatomy of the hind limbs of a human, dog, and deer (not to scale).

As you can see here, despite a few minor morphological changes, the leg above the ankle (seperated by the horizontal line) is pretty similar in all three animals. There is a pelvis, a femur, and a tibia fibula pair (in the deer, the two bones have fused together). But below the ankle, we can see that pedes (feet) are all pretty different. In humans, we have a plantigrade foot, where out tarsals, metatarsals, and phalanges (the bones of the foot) all touch the ground. In the dog, we see a digitigrade foot, where only the phalanges (or the padding between them and the bone) touch the ground, and we see an elongated set of metatarsals. The deer takes things to an extreme. It has an unguligrade foot, where the only part that touches the ground is the ungual phalanx (tip-toe), covered by the hoof. Like with their fused tibia-fibula, they have fused metatarsals and phalanges as well. And as you can see, the metatarsals are extremely elongated, accounting for a good portion of the total leg length. This is something I clearly wasn't thinking about when I first saw the bones.

Because of how small I assumed the leg would have been in life, and the aged appearance of the bone, I completely discredited the possibility of it having belonged to a deer. Admittedly, this was a foolish mistake. With the bones I had, the missing skeletal elements, and the tissue that would have surrounded them in life, this animal would have been around 80 cm (2.6 ft) at the hip, if not taller (the scale bar in the photo is 15cm). That's not a huge deer, but for a white-tailed, it's certainly not small either. 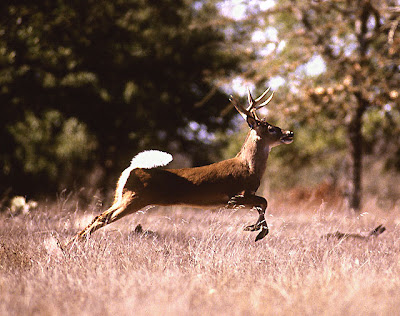 So congratulations again to Scott Elyard for his correct identification! I do believe what we have here (please correct me if you think I'm still missing something) are elements of the left hind limb of Odocoileus virginianus virginianus, the Virginia white-tailed deer. I realize that to many, this identification would have been a quick affair. Others would have been completely perplexed. I fall somewhere in between those two ends of the spectrum, and I hope that this lengthy (almost too much so) post has helped show the process involved with how I came to my conclusion. I made a discovery, formulated a hypothesis, tested it, falsified it, came up with a new one, made observations, collected data, and drew a conclusion that best fit the information I had. Of course, I did this on a very basic level, and there is always the possibility that additional information could come to light that would alter the conclusion I reached. But that's just how science works.

Perhaps I take too much pleasure in the finding of dead animal parts. But something as seemingly grotesque as coming across a dismembered limb (I still wonder how it got there in the first place) can actually serve a fairly practical purpose. It got me thinking - something I feel I don't do quite enough of anymore - and got some of the people around me (in real life and on the web) immediately interested in the scientific process and natural history. As far as I'm concerned, that's a win-win situation. Actually, make that win-win-win situation, because hopefully it's a win for all of you too!
Posted by David Tana at 2:30 PM