Blogging on the Bay (Part 1) 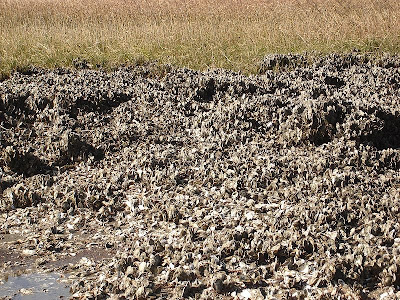 An oyster bed at low tide. Notice the thousands of individual oysters encrusted on top of one another. Photo taken by JohnCub, from Wikimedia Commons.

The Chesapeake Bay is home to a wonderful variety of plants and animals. One of the invertebrates that makes a home here is the Eastern oyster, Crassostrea virginica.  This bivalve mollusk, which was once abundant in the Bay, has faced many hardships in the recent past. Over-harvesting, poor water quality from over nitrification and pollution, and in increase in sedimentation from runoff has caused populations to decline to less than 2% of their historical numbers. This is a problem for the oysters, and other denizens of the Bay.


When oysters breed, the larvae float in the water column until they find a hard substrate to latch onto. Often, this substrate is the shell of other oysters. But with less oysters in the Bay, it is becoming harder and harder for the larvae to find a place to call home. The once abundant oyster bars (or reefs) are no more, which means that other fish and invertebrates also no longer have a place to make their homes. If a lucky oyster can find a resting place, it latches on, and starts to secret a shell around it. These juveniles, known as spat, are hermaphroditic, only becoming male or female later in life. Once they reach reproductive age, they release eggs and sperm into the water, and the cycle starts again.

As if hunting for real estate at such a young age doesn't pose enough of a problem, C. virginica also has trouble finding a proper meal. The Eastern oyster is a shallow water filter feeder. Large individuals are said to be able to filter over 40 gallons of water a day. In fact, the not so distant past, it would take all the oysters in the Bay between three and five days to filter the entire volume of the Chesapeake.  Now it takes them more than a year to accomplish the same goal. But the new filter feeding problem comes from the sediment from runoff that clogs the Bay, which also clogs their gills as they pump water through their shells. When they should be filtering out the plankton and other nutritions particulates, they are filtering dirt and polluted water, which effectively chokes them to death. This, in combination with the other factors mentioned above, makes the situation for oysters in the Bay rather grim.

Luckily there are both organizations and individuals working to restore the oyster populations in the Chesapeake. Certain areas of the Bay are now protected from harvesting, so that oysters can live and reproduce with minimal human interference. Sustainable practices keep unprotected areas from becoming over harvested. And shells from harvested oysters are collected and placed back into the Bay, in the hopes that they will provide a home for spat that are "seeded" on these natural, man-made bars. After 100 plus years of population decline, humans are finally realizing the importance of these animals, and making a concerted effort to help them regain their former glory.
Posted by David Tana at 11:29 PM