Welcome to another edition of The Boneyard, a blog carnival specializing in items of paleontological interest. Paleontology, defined, is the study of ancient life and their remains. It seems straightforward. And in many ways it is. But it's also a very eclectic field of study, encompassing geology, chemistry, physics, genetics, mathematics, biology, computer sciences, ecology, engineering, art, systematics and so much more. You don't just find paleontologists in the field digging up bones, or in museums alongside them, but also in labs, studios, classrooms - even on the internet. And paleontology not only has the ability to teach us about the past, but the present and future as well. Is it really any wonder then, that paleontology of all sciences seems to capture the attention of people all over the world, both young and old? I think not. I hope that in this edition of The Boneyard, I manage to share with you, some of the fascinating things happening in the world of paleontology today.

Much of what I know about paleontology, I learned in my youth. When I got to university, I learned a lot of the finer points from my professors. Recently, I was lucky enough to get a refresher from one of them, when Dr. Thomas R. Holtz, Jr. shared a guest (cross) post here at Superoceras on what everyone should know about paleontology. Whether you're an old pro, or new to the subject, I think it's a must read. 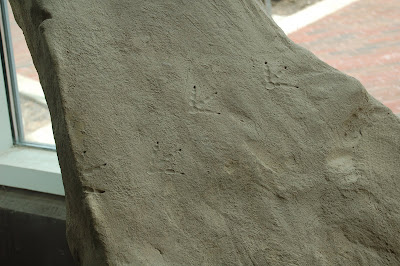 Theropod footprints, a type of ichnofossil, on display at the "Dinosaur Mysteries" exhibit at the Maryland Science Center.

With that foundation in place, we can begin to delve into other topics more specific to the various subfields within paleontology. Maybe you're interested in ichnology, the study of trace fossils (burrows, trackways, coprolites, and the like). Well you're in luck, as Anthony Martin of The Great Cretaceous Walk offers insights into the role of gastroliths in marine sauropsids of the Mesozoic, takes us on a trip to the former Cretaceous seaway in Boulia, and recalls his time spent at the Dinosaur Dreaming dig site as the 2011 season comes to a close. 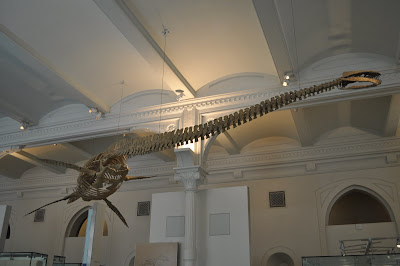 A Thalassomedon "swims" overhead in the Vertebrate Origins Hall of the American Museum of Natural History (thanks for catching the correction, Matt).

Speaking of dinosaurs, it seems like last month, the paleo-blogosphere was flooded with news and views of dinosaurs, old and new. Dinosaur paleontology has always had a large appeal, and that hasn't changed much in the last 169 years. Last week, the "big dinosaur" news was the official announcement of Brontomerus mcintoshi, which two of the authors, Mike Taylor and Matt Wedel, wrote about extensively (and defended) over at Sauropod Vertebrae Picture of the Week. If you have any print coverage of "thunder thighs", send it their way. 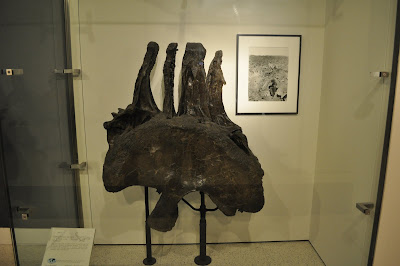 The Diplodocus pelvis has nothing on that of Brontomerus, even if it was one of the first fossils collected by the AMNH.

Fellow saurischians Dinky and the Skull quibble about the potential for vocalization in different lineages of archosaurs over at Raptormaniacs. Leave it to Albertonykus to ruin my childhood forever, as he succinctly explains why non-avian dinosaurs probably couldn't sing, despite what television and motion pictures might lead you to believe.

While on the subject of common misconceptions and blunders in the paleontological realm of the media, Tricia's Obligatory Art Blog doesn't hold back as she expresses her disappointed in the trailer for the upcoming series, Terra Nova. I completely agree with her, and if I were Steven Spielberg, I'd listen to Trish's advice on this one. We don't need any more misconceptions perpetuated, or memes introduced in public. Don't you guys remember what happened with the dinosaur formerly known as "Syntarsus"? Unacceptable. 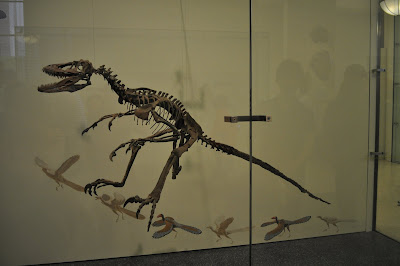 A Deinonychus "takes flight" at the AMNH, showing the relationship between "non-avian dinosaurs" and birds.

But when it comes to former dinosaurs and skewed public opinion on paleontology, there is no story more infamous than that of "Archaeoraptor". David Orr (founder of The Boneyard 2.0) of Love in the Time of Chasmosaurus looks back at a 1989 Discover article on Stephen Czerkas, a central figure in the plot, and shows that in spite of all the things he's said and done, he still might have something to offer the paleontological community. His Deinonychus models really are phenomenal, even if he doesn't believe them to be "non- avian dinosaurs" (but rather secondarily flightless birds).

Tyrannosaurus rex: extreme predator or simple scavanger? This is one of the "dino-mysteries" that you hear about quite a bit (because there is no way it could possibly both hunt and scavange), with opinions ranging from one extreme to another, and evidence that seems to favor each side. Well, if you've been on the fence about this one, you're in luck. Matt van Rooijen over at The Optimistic Painting Blog has created a piece of art that should be about all the proof you need to see that this Cretaceous creature was a real predator. 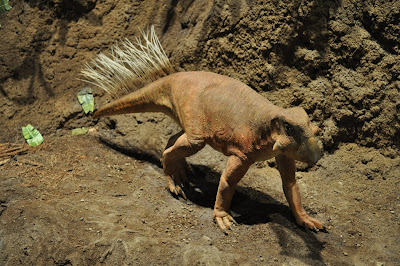 Psittacosaurus, reconstructed, at the Carnegie Museum of Natural History's "Dinosaurs in their Time" exhibit. Look at those quills!

If you're not a huge fan of saurischians, fear not. On the ornithischian front, Taylor over at Secrets of the Horned Dinosaurs writes about the quills of Psittacosaurus, their possible origin and function, and the relationship between marginocephalians and heterodontosaurids.

Anthony Maltese also brings in news from the RMDRC Paleo Lab blog of a massive lambeosaur hindlimb that has recently been collected from the Judith River Formation. With the help of some local ranchers, they managed to get this huge right leg out of the ground and into the lab where they have recently completed preparations of the specimen. Look at the size of that thing! 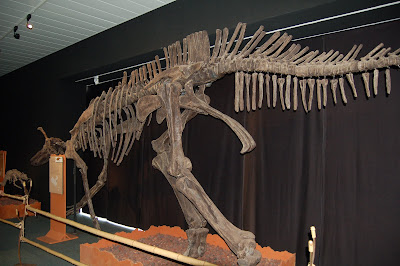 A rear-end view of the lambeosaurine Tsintaosaurus, on display at the "Chinasaurs" exhibition at the Maryland Science Center.

Dinosaurs are a fascinating group of animals, but let's not forget there were other critters all over the place during the Mesozoic. Pterosaurs in particular are high on my list of favorites, and over at Tetrapod Zoology, Darren Naish writes about "Mrs. T.", the Darwinopterus specimen found with an egg, and how her discovery can shed light on the sexual behavior of the pterosaurs. 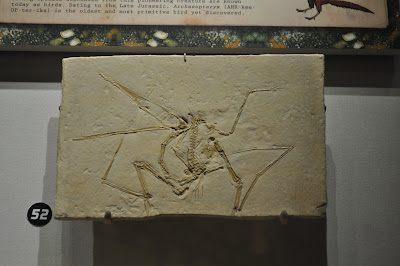 A beautifully preserved Pterodactylus antiquus from the Solenhofen limestone, at the Carnegie Museum of Natural History.

Mike Habib also writes on flight capabilities in the largest of pterosaurs over at Pterosaur.net Blog. With the help of Mark Witton, they've published a paper that helps prove the notion that, not only could behemoths like Quetzalcoatlus make it off the ground, they managed to do so in a style all their own.

Over at A Central Coast Paleontologist, accpaleo provides some insight on some other extinct vertebrates. In his extremely detailed post on Arctodus, the "short-faced bear" (or not so short-faced, as it turns out), he gives a great account on the "evolution" of our view of this critter, from "uber bear" to "just another bear", showing that science is about learning what you can from the evidence available, and not trying to prove what you want to believe. 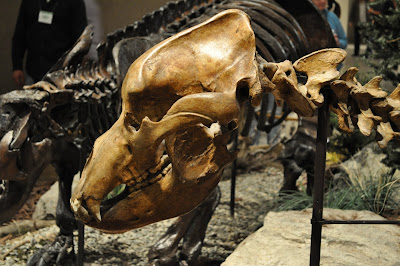 Left lateral view of the skull of Ursus spelaeus, the Pleistocene cave bear, hanging out in the Carnegie Museum.

For more on mammals on our own branch of the "family tree", Brian Switek (founder of The Boneyard 1.0) discusses what we do and do not know about the evolutionary history of our own species over at Laelaps. Looking at our fossil record, he is right to question which, if any, fossil hominids represent our direct ancestors, as opposed to just part being of our extended family. 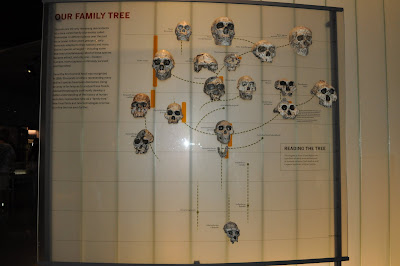 It's all in the family - our family - at the AMNH.

For all of you invertebrate enthusiasts out there, Kentuckiana Mike writes about a pea sized Waldron Shale fossil he collected over at Louisville Fossils and Beyond. After a bit of investigation, there is lots more to be said about this enigmatic echinoderm, so be on the lookout for more in the future. 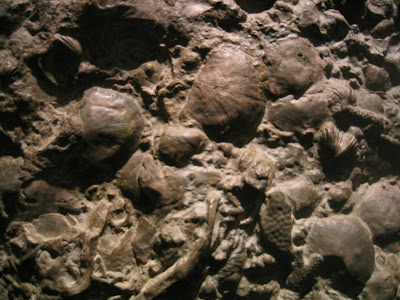 An assemblage of fossil invertebrates at the Smithsonian's National Museum of Natural History. How many can you identify?

In spite of some recent, less than favorable behavior demonstrated towards him, Dave Hone of Archosaur Musings was good enough to indulge his readers with a top five list of things he'd like to see if he could travel back in time. Those are some great picks, if I do say so myself.

Remember The Dinosauricon? I know I was a little saddened when it disappeared from the web. But its founder, Mike Keesey has recently started a new project he's calling PhyloPic. So far, it's off to a great start and he offers an update of the first week's activity over at A Three-Pound Monkey Brain. I wish him all the best in his new endeavor, which you can easily be a part of. 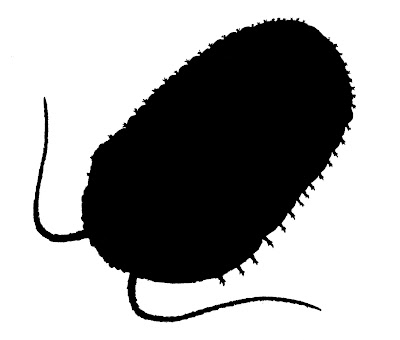 A recent addition to the database, Phacops rana, a Devonian trilobite.

Also new to the web in the last few weeks it Paleo Illustrata: One Man's Journey into the Art of Paleontology. On behalf of Superoceras, The Boneyard, and the paleo and art blogospheres, I'd like to welcome Stu Pond to the Interwebs! Be sure to go visit his site and welcome him yourself. I know I've added it to my blogroll. His presence goes to show that there is no shortage of voices when it comes to trying to disseminate paleontological information to the masses.

I hope that in this edition of The Boneyard, I've managed to do just that. It's been great hosting, and I look forward to doing it again in the future. Thanks to all who submitted posts and have helped spread the word. That being said, there is still plenty left to say on the subject of paleontology. Be sure to submit and "tune in" next month as well, when The Boneyard 2.8 will be hosted by Sam Wise over at Sorting Out Science. Have a great month, everyone!
Posted by David Tana at 5:45 PM