Simosuchus and the trouble with "living fossils".

When people think of Crocodyliformes, they probably think primarily of the living crocodylians; the alligators, caimans, crocodiles and gavials that inhabit the waters of our Holocene world. They think of large, scaly, man eating beasts with powerful jaws that managed to outlive the dinosaurs and are always lurking right beneath the surface of some river or swamp to snatch up anything that comes along and disturbs the water's edge. And for the most part, they think they are all relatively similar. Sure, some may grow larger than others, they have different shaped snouts, and they live in somewhat different habitats, but for all intents and purposes, a crocodylian is a crocodylian. Just another toothy grin in a sea of menacing reptiles.

Just to get it out of the way, let me make one thing clear: nothing could be further from the truth. Extant crocodylians are very, very cool. They had relatives that did live side by side with the dinosaurs. And contrary to popular belief, are more closely related to modern birds than they are to the lizards, snakes, and turtles they are often associated with. They are what is left of a group that was much more diverse in the past than it is today. And the Crocodyliformes, the group that contains the crocodylians, was even larger and more diverse than that. Back in 2000, a paper was published in the journal Nature that introduced the world to a very different type of crocodyliform from the Late Cretaceous of Madagascar named Simosuchus clarki. Known from a well preserved skull and partial skeleton, this notosuchian had a blunt, "pug-like" snout, leaf-shaped teeth, and a short, stout body covered in osteoderms.

Now, when I say that Simosuchus was different, I mean that in comparison to today's crocodylians. Notosuchia was a group of terrestrial Cretaceous crocodyliforms that was already chock full of odd critters, from the heavily armored Armadillosuchus, the duck-billed Anatosuchus, and the possibly burrowing, bunny-faced Yacarerani. But even with family like that, Simosuchus stands out for a lot of reasons. Aside from its unusual appearance, Simosuchus is also known from unusually complete and well preserved remains that have been unearthed since it was first discovered. Nearly every bone from nose to tail, including osteoderms covering most of the body, have been studied and described in a recently released memoir from the Journal of Vertebrate Paleontology. This also makes it unique, as this memoir represents one of the first times any crocodyliform, alive or extinct, has been studied in such detail. 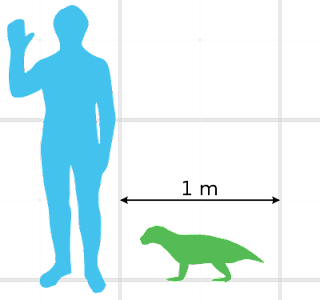 Simosuchus scale comparison with the "Pioneer Dork", by Smokeybjb, from Wikimedia Commons.
Simosuchus was a small animal at a little under one meter in length. Small differences in the shape and ornamentation of skulls found indicate that the species may have been sexually dimorphic. Its short, almost shovel-like snout, full of leaf-shaped teeth were components of a skull that would have been held 45° from horizontal in an osteological neutral pose. Both the body and limbs of this animal were wrapped in well developed osteoderms that interlocked with one another leaving little room for flexibility and movement. It had the shortest known tail of any crocodyliform and robust limbs ending in a reduced manus and pedes with large claws. All these features, in addition to the known environment in which it lived, point to an animal that was completely terrestrial, more than likely herbivorous, and perhaps even fossorial (although this last point is much less certain). This was an animal from the southern Gondwana supercontinent that, like many other notosuchians, filled an ecological niche that would have been filled by some variety of dinosaur up north. This niche availability led to remarkable diversity in a group of organisms that is severely underrepresented by the known taxa of today. 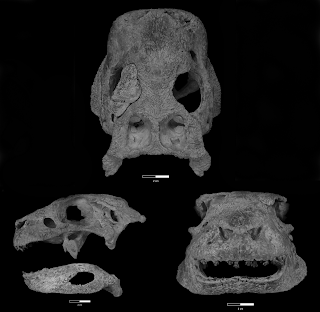 Maybe that is why so many people today are shocked to learn that crocodyliformes like Simosuchus ever existed. They are only ever exposed to or taught about modern "prehistoric" crocodylians that have been around, unchanged, for tens of millions of years. While it is true that crocodylian bauplan (body plan) is known in the fossil record from as far back as the Late Cretaceous, species like the giant dinosaur eating alligatoroid Deinosuchus and hoofed, cursorial predatory Pristichampus prove that there can always be variation on that plan. A modern crocodylian is not prehistoric; it is, by definition, modern. It, like every other living thing, has been evolving for millions of years. That's one of the reasons that the oxymoronic term "living fossil" is one that always gets under my skin.

I'll put it out there. There is no such thing as a living fossil. A fossil, by definition, is the remains or traces of a living thing from the past. It cannot be alive. So the closest you're ever going to get to one is "Rexy", the Tyrannosaurus skeleton that magically comes to life from the Night at the Museum films. However, many people use the term to describe organisms that appear to have gone unchanged for millions or years. Organisms like horseshoe crabs, cycads, crocodiles, ginkos, giant salamamders, and horsetails have all be labeled as organisms that have gone unchanged throughout time. This is a common misconception. While evolutionary rates vary among different groups of organisms, all living things are evolving, generation after generation, even if the changes are so subtle they don't make themselves known in an organisms outward appearance.

Do people call things "living fossils" because they look like they are out of their place and time? Is it because they come from groups of organisms that are, geologically speaking, older than others? Is it because they appear at one place in time, seem to vanish, and then reappear in the modern world (the coelacanth Latimeria is an example of this phenomena, but is known as a "Lazarus taxon" rather than a "living fossil" because of the break in its fossil record)? Regardless, "living fossil" really is an outdated term, and if you're going to call a crocodile a living fossil because it looks similar to some of its fossil predecessors, I'm going to have to assume that people are going to start calling humans living fossils as well, as we resemble some of ours. For that matter, I guess you'd have to call most living things with a rich fossil record and any resemblance to one of its kin a living fossil. It seems like a slippery slope, and I think its probably better to just stop using the term altogether.

And maybe we're on the right track when it comes to cleaning house on this one piece of natural history terminology. Ever since the Society of Vertebrate Paleontology press release (titled " Bizarre Reptile Challenges Notion of Crocodiles as 'Living Fossils' ") came out a month ago, the media has picked up on the Simosuchus story and they all seem to be repeating the same point: that this exceptional animal is here to to dispel the myth of the "living fossil" and show that all crocodyliforms are not the same. I could not be happier. Crocodyliformes is a wonderfully diverse group of animals, most of whom went extinct long ago. We are lucky to share a world with some of their modern aquatic kin. But they are in no way, shape, or form representative of some of the critters that came before them, and they are certainly not "living fossils". 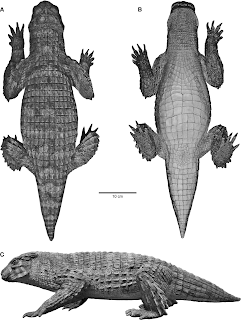 Reconstruction of Simosuchus clarki in dorsal (A), ventral (B), and left lateral (C) views. Based on photographs of sculpture by Boban Fillipović, adjusted digitally by Lucille Betti-Nash. From Kraus et al., 2010.