Cold Fish in the Chesapeake Bay 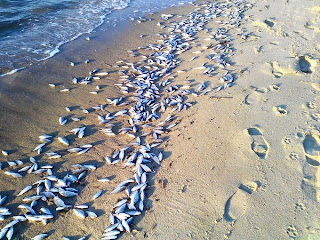 Dead spot and croaker on the shores of the Chesapeake Bay in Stevensonville, Maryland. Photo by Charles Poukish, from the Associated Press.
There have been several reports since the beginning of the new year regarding the mass deaths of animals across the globe. Starting with the death of around 5,000 red-winged blackbirds (Agelaius phoeniceus) in Arkansas on New year's Eve, media outlets have been quick to pick up on other stories of other mass bird deaths and fish kills. Not only that, but some have been quick to suggest conspiracy theories - from toxic chemicals, to U.F.O.'s, to the coming apocalypse - as the reason for these mass deaths. I'm not going to touch any of that, or perpetuate the notion that these events are in any way, shape, or form related to one another, because they are not. But I do want to talk about one of the instances that hits a little closer to home for me, and its real cause: a recent mass fish kill on the Chesapeake Bay, and its link to global climate change.
The Maryland Department of the Environment put out a press release last Wednesday that suggested the sudden death or around 2 million juvenile spot (Leiostomus xanthurus) and some Atlantic croaker (Micropogonias undulatus) was the result of unusually cold waters in the Chesapeake Bay where they make their home. While the adult fish leave the Bay in winter, juveniles often stay behind. And even though they can normally survive in water as cold as 4 or 5 °C, surface water temperatures in the Bay have been at an all time low; around 0.5°C. These record lows aren't unheard of in the region, but it is the first time in around 25 years that they have hit this hard. This also isn't the first time a fish kill of this size has taken place in the Bay. As the press release mentions, in 1976, around 15 million spot died from the same cause. That's a lot of dead fish.
Now, of course, these fish are dying from natural causes. And the loss of 2 million fish in the Bay, while certainly not a good thing, also isn't the end of the world. I have no doubt that the population will rebound, and the ecosystem of the Chesapeake Bay will be left intact. But what I do worry about is next winter on the Bay, and the winter after that, and the winter after that. It is worth mentioning that the extremely cold winter this year in Maryland is being brought on by massive amounts of cold air coming down from the North. Many hypothesize that this is a direct result of global climate change. As sea ice in the Arctic melts, the once reflective white ice is replaced by darker sea water, which absorb heat. This causes changes in pressure and temperature, resulting in cold air being forced south, accounting for increasingly cold winters here in the Mid-Atlantic region. At least, that's what NOAA scientists are getting at in their 2010 Arctic Report Card.
Again, contrary to popular belief, the presence of colder winters doesn't disprove global climate change. In fact, this particularly cold winter on the Chesapeake Bay comes after years of increased temperatures in summer Bay waters and a completely different set of issues that are associated with the warming (like the eelgrass dieback, and increased number of cownose rays eating shellfish in the Bay). Warm waters in summer mean more favorable conditions for the spot and croaker in the Bay. And cold water in winters mean terrible conditions for the same little fish. I hate to sound alarmist, but while this year's fish kill might not mean a whole lot in terms of the population, what would several years worth of similar events mean for the Bay's fish, amongst other critters?
I've spent a great deal of time on the Chesapeake Bay, and there really is nowhere else like it on Earth. It's one of our greatest natural treasures, and provides a home for all kinds of fresh and salt water species. While the majority of those following these mass animal deaths in the news are worried that the End of Days is near, I'm a little bit more concerned with the real ecological implications. I think it's incredibly important to make sure that we take stock of the current events, look for their causes, and if necessary, do something to work towards solutions to solve the real problems facing the animals we're giving so much attention to recently. In the case of this fish kill, everything seems alright for now. Cause and effect have been identified, and the Bay's waters are being monitored. This is great news for all of the Bay's flora and fauna. And great news for us as well, as with conservation and preservation comes longevity, meaning we'll hopefully be able to enjoy the Bay for years to come. So as far as the "massive", "puzzling" nature of this event, you have nothing to fear (or ponder) any longer. But if I hear anything that suggests extraterrestrial involvement, the occult, or government conspiracies, I'll be sure to let you know.
Posted by David Tana at 4:45 PM