Interweb Science of the Week #2

If there's one thing I love more than science, it's interweb science! And after following last weeks Science Online 2011 meeting via Twitter, I've been more inspired than ever to do my part and spread scientific knowledge on the web. That being said, let's get right on to this second edition of "Interweb Science of the Week". And this time around, it's going to be a mammoth event. 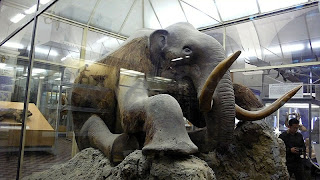 The stuffed remains of the Beresovka mammoth, in the Museum of Zoology in St. Petersburg, Russia. Photo by Tanapon, from Wikimedia Commons.

Earlier this week, many news outlets were quick to pick up on a news story coming out of Japan concerning a team of scientists, a female elephant, and a frozen woolly mammoth. In a scene right out of "Pleistocene Park" Akira Iritani, professor emeritus from Kyoto University in Japan, has declared that he will have successfully brought this animal back from extinction in the next five years.

Mammuthus primigenius, the woolly mammoth, went extinct around 10,000 years ago. But Professor Iritani has developed a new technique that will allow him to successfully extract nuclei from frozen mammoth cells, something no one else has previously been able to do. If he can perform this task (which he has done already with mouse nuclei that was frozen for 16 years), he and his team would then transplant the mammoth nuclei into the ova of an elephant that has had its nuclei removed, and artificially inseminate the female elephant with the mammoth embryo. After around 20 months, theoretically, a cloned baby mammoth would be born.

If you've heard this story, one of two really big questions probably came to mind. Could this really work, and if it can, should it really happen? Well, I certainly think it's possible, and given the cloning technology that currently exists, five years doesn't really seem like that much of an improbability. But just because we have the technology, does that mean we have to use it? I know what Ian Malcolm would say. And part of me would certainly agree with him. Just because we could, doesn't mean we should. But there is another part of me that would love to see a heard of woolly mammoth marching across a northern plain. I think a lot of people would, both for the sheer excitement of if, and from what we could stand to learn from studying a living, breathing, formerly extinct animal.

Please, check out the links below for lots of internet media coverage of this story - that's what it's there for! And that, my friends, is why the cloning of the woolly mammoth, is this weeks Interweb Science of the Week.