A new pelagornithid from Chile

On Monday, I mentioned that I was planning on blogging about a "newly discovered/published, saw toothed, South American dinosaur whose ancestors survived the end Cretaceous extinction event". I know I must have caught your attention, because I mean, that sounds sensational! Well, ladies and gentlemen, here you have it. Meet Pelagornis chilensis, the "pseudotoothed" Miocene dinosaur that has everyone on the edge of their seats. 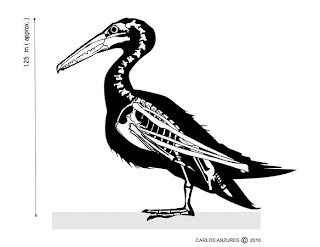 Artist's rendering of the skeleton of a new seabird found in Chile with a record-breaking wingspan and bony teeth. Illustration by Carlos Anzures.

At least, you'd think it would. Start throwing buzzwords and superlatives in the mix, and you're sure to get people interested, right? As you can see, the title to this post is rather to the point. And really, that's all you have to say. You don't need to use words like "giant" or "saw-toothed" to grab peoples attention. And it's cool that it has the largest wingspan of any known bird, but is that the only thing that matters? Maybe I'm naïve and you really do/it really is. But I think that P. chilensis is awesome for a lot of other reasons as well. Let's talk about them.

For one, pelagornithids are all pretty cool in general. They are widely known as the largest volant birds (with the exception of the extinct teratorn Argentavis magnificens) to have ever lived. Even the smallest pelagornithids were large - about as big as modern albatross. They were the dominant sea birds for most of the Cenozoic, and based on the fossil evidence, they also had a global distribution, which meant that these critters were basically all over the place for a very, very long time. The feature that gives the group its name are the "pseutoteeth", which as the name indicates, are not teeth at all, but rather, bony growths that extend from the mandibular and premaxillary bones (as seen in the photo above by S. Tränkner, of the Forschungsinstitut Senckenberg). They do look a bit intimidating, and I remember the first time I looked up and saw one at the Smithsonian National Museum of Natural History (this one, to be exact). But no need to fear; those teeth weren't used to nip at hominids from the air, but rather, to catch and hold onto fish and squid that they skimmed from the water as they glided above it. 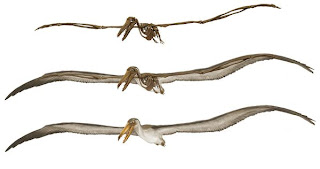 P. chilensis in particular is cool, more specifically, because the specimen described is the most complete, least deformed specimen of a pelagornithid ever discovered. For a group that has a global distribution and long geologic range, this might be surprising. But like all birds, pelagornithids had hollow bones. Birds this big needed them to even have a chance at having a low enough mass to stay in the air. This means that more often than not, specimens recovered are crushed or damaged in other ways, and are often incomplete as well. P. chilensis however, has a skeleton that is very well represented, with limb bones that are mostly complete and uncrushed. This means that, like never before, we can get an accurate restoration of this animals skeleton, and reconstruction of how it would have looked in life (as seen in the image above, illustration by Carlos Anzures). 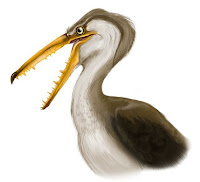 It also sheds a great deal of light on the group as a whole. In fact, a lot of light has been shed. The discovery of P. chilensis literally rewrites the pelagornithid family tree, and the authors of the article suggest lumping the three known genera of Neogene pelagornithids (Pelagornis, Osteodontornis, and Pseudodontornis, as well as the often questioned genera Neodontornis and Cyphornis) into the genus Pelagornis. I'm all for lumping - and splitting - when appropriate, and feel like this is probably another one of the situations in which it is all right. So that, I think, is one of the more important things to take away from this discovery. Being a big bird with spiky "teeth" is cool and all, but the real relevance of the find lies in what we can learn from it and how it changes what we think we know about this magnificent group of extinct birds (reconstruction of Pelagornis chilensis above. Illustration by Carlos Anzures) .

I hope you all enjoyed the pretty pictures and informative links throughout the post, and weren't disappointed that I wasn't writing about something more akin to this. To be fair though, this is a giant, saw-toothed dinosaur, so I didn't intentionally try to mislead you. You're just used to reading too many sensationalized paleo-articles in the news (thanks to Dr. Holtz for sending that out to the VERTPALEO listserv, it made my day). For more detailed, accurate information on the find, check out the Society of Vertebrate Paleontolgy press release on the bird here, and the complete Journal of Vertebrate Paleontology article here. 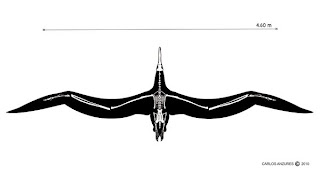 Artist's rendering of the skeleton of a newfound prehistoric seabird as seen from above. Illustration by Carlos Anzures.

References
Mayr, G., Rubilar-Rogers, D., et al. 2010. Osteology of a new giant bony-toothed bird from the Miocene of Chile, with a revision of the taxonomy of Neogene Pelagornithidae. Journal of Vertebrate Paleontology, 30(5),1311-1330.

All images from the National Geographic Daily News Pictures website.
Posted by David Tana at 8:00 AM