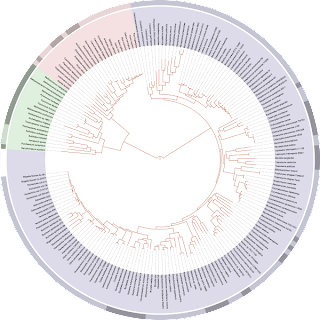 The "Tree of Life", courtesy of Wikimedia Commons.

Charles Darwin (a good friend of mine) stated this basic idea in his groundbreaking work On the Origin of Species a little over 150 years ago. He theorized that all organisms must have descended from one common ancestor. Modern sciences have shown that we are all made of the same genetic code, and that using phylogenetic trees, we can unite all living things in groups inside of groups that can then be united themselves. Still, Universal Common Ancestry (UCA) is questioned, even by those that accept the concepts of evolution. Transfers of genetic material, through endosymbiosis or horizontal gene transfer, are common among Bacteria and Archaea (two of the domains of life, along with Eukarya). Because of these processes, many suspect that two (or more) independent (yet convergent) origins of life on were possible on Earth. This would mean that while these life forms could "mix and match" parts, there is not a single "common ancestor" for all known life. 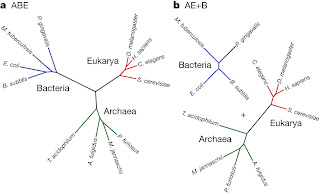 Two different phylogenetic models showing common ancestry, and independent ancestry of Earth's domains of life, from Nature.
Theobald's analysis (phylogenetic and statistical) shows strong evidence in support of UCA, even in the event of two independent origins of life. This is a great day for science, and for Theobald, who really went above and beyond in coming up with his methods for this analysis. He tackled a pretty big question, and I'm really happy to see the results. Check out the paper online if you want all the technical information, and a commentary on the article from the same issue. For more information on your universal family tree, visit the Tree of Life Web Project (you are here.)