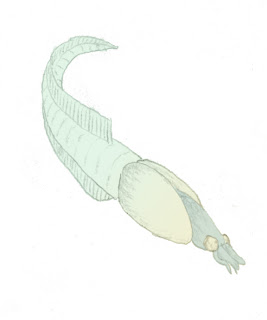 
Until the publication of this paper, the affinities of Nectocaris have been hard to determine. From the description of the original holotype specimen, it appeared to be a mixed bag of parts all thrown together in one strange organism (which wouldn't actually be that strange at all given some of the other critters from the Burgess Shale that were swimming around in the Cambrian seas). This animal appeared to have the tentacles of a cephalopod, the carapace (head shield) of an arthropod, and fleshy fins supported by internal spines along a laterally compressed body, similar to those seen in some chordates. So many parts, so few known relatives. This resulted in the life restoration seen above which looks like some kind of squid-shrimp-fish. I mean, that's cool and all, but for systematists, not really very helpful. 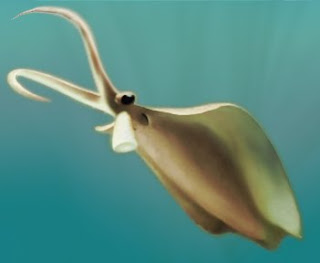 As it turns out this original description was not entirely accurate. The new fossils have shown that the carapace wasn't a carapace at all; it may have actually been a cylindrical funnel (or siphon) that had been flattened and simply looked like a carapace extending behind the eyes. It turns out the laterally compressed body, complete with fins and spines, was actually dorsoventrally compressed, and there were no spines or myomeres or anything like them. It may have been more like the body of a squid or cuttlefish, with soft, fleshy fins, a siphon, and two prominent tentacles. All this new information led the authors of the paper to a radical new hypothesis: Nectocaris is a cephalopod. And the earliest known cephalopod at that.

I do however, have one problem with the article. They make the claim that Nectocaris is a stem cephalopod, meaning that it is closer to the ancestral form for all cephalopods. Now I don't necessarily buy the hypothetical archimollusc (HAM) theory, but I am solidly convinced that the ancestral cephalopod was solid; that is, it was more than likely a shelled organism like all the other mulluscs, and not a soft bodied animal. Prior to this paper, the oldest known cephalopod was Plectronoceras, a nautiloid from the Upper Cambrian. It was a shelled, snail-like cephalopod that lived on the sea floor. Most early groups of cephalopods (like the Nautiloids and Ammonoids) were shelled, and we only see species with a secondary loss of shell within Coleoidea (the more familiar species like octopuses and squid). Smith and Caron suggest that all cephalopods started out shell less (like Nectocaris), as any animal showing up this early in the fossil record is too old to have secondarily lost its shell from an older ancestor.

I highly doubt this claim, as it would mean that all of the different early cephalopod groups independently and convergently evolved into their well known shelled forms. Considering the fact that all other molluscs are ancestrally shelled, and that they are all ancestrally benthic (living on the sea floor) , I think that cephalopods were probably ancestrally shelled, benthic organisms as well. The body plan suited for a life of actively hunting prey in the water column evolved later, and then secondarily, loss of shells occured. This line of thought seems much more parsimonious to me, as it requires much fewer character changes over time.

So what does that mean for Nectocaris? If it is a cephalopod, and if the authors of this paper are correct, it is definitely the oldest found so far. But those are both big "ifs".  Is it at the base of the cephalopod branch of the "Tree of Life"? I definitely think the jury is still out on that one. I think it's much more likely that, if  Nectocaris is a cephalopod, it is a derived form on its own branch of the cladogram (perhaps with other problematic Cambrian forms like Petalilium and Vetustovermis) that convergently evolved its squid like form, rather than an ancestral form to all cephalopods. The fossil record is notoriously incomplete, and there will probably always be ambiguity and disagreement with the classification of organisms. Especially those only known from fossil evidence. But just as these 91 new Nectocaris specimens have helped to redefine what we know about this animal, there is always the potential for future discoveries to be made that will help clear up our understanding of cephalopod origins.

Science is great that way. New information leads to new ideas. What a wonderful way to live. So goodbye "swimming shrimp with wings", hello squishy cephalopod! 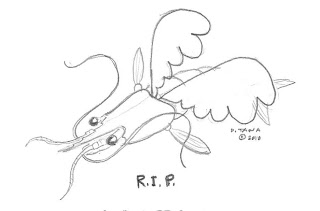