Making inferences using living animals is a great way to come up with ideas on what color dinosaurs may have been, but ultimately, most kids were disappointed when you told them "the process of fossilization doesn't preserve color" or "no one will ever know". Even the United States Geological Survey (USGS) says they don't have any idea (but the last time that site was updated was 2001, so they may not say it anymore). But recently, discoveries have been made that are making people rethink the answer to that long standing question. I humbly present:

DINOSAURS! NOW IN COLOR!
Science is awesome. And this proves it. Every day, something most people generally considered impossible to do or determine is actually accomplished or discovered, and one more question answered. I give you three instances, which have been in the news in recent years, that help answer the question of children everywhere. 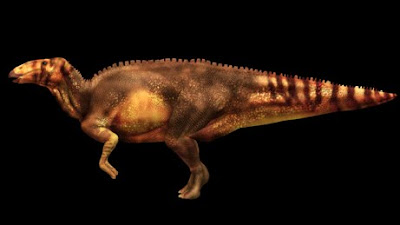 "Dakota" is not the first dinosaur mummy to be discovered by paleontologists, but is the most recent. Like many other hadrosaur mummies, "Dakota" has not only hard tissues (like bones and teeth), but many soft tissues (like muscles, organs, and skin) preserved as well. Again, skin and skin impressions have been found for many different species of dinosaur (I know I've heard of Triceratops skin impressions in the past, and talk of an undescribed specimen that may even have bristles or quills like its smaller cousin Psittacosaurus), but "Dakota" is different in one regard: in addition to having skin impressions, there are also hints of coloration patterns preserved in the rock. 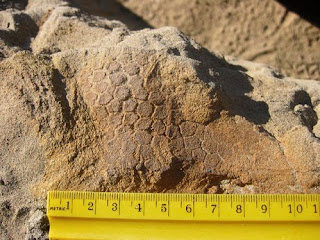 It's hard to tell from this image (photograph by Tyler Lyson , 2007, National Geographic), but if you look closely at this section of fossilized skin from the joint area of the animal's forearm, you can see transitioning bands of lighter and darker rock. This has led researchers to believe that "Dakota" (as well as other Edmontosaurus) may have exhibited banding on their arms, tails, and other parts of the body, as depicted in the artist's reconstruction above (art by Julius T. Csotonyi, 2007, National Geographic). I can understand why people may be skeptical when it comes to believing that this banding seen in the fossilized skin is actually the remains of pigment that was once present in the living tissue. I was hesitant myself at first, but one has to keep in mind that this isn't merely an impression of skin, but rather, skin that has been mineralized and preserved in three dimensions so as to be able to see the soft tissue structures of the cells under a Environmental Scanning Electron Microscope (Manning et al. 2009). With that kind of detail preserved, it isn't hard to believe that, while we might not know the exact color of "Dakota", we can see traces of color pattern in her skin.

But things only get better from there. There have been several discoveries made pertaining to the subject of dinosaur color in recent months. Unfortunately, you'll have to wait until next time to hear about it! I'd rather keep you all on the edge of your seats than bore you with a terribly long post. So with that in mind, keep your eyes open for:

For more information on this particular discovery, check out Dr. Manning's book "Grave Secrets of a Dinosaur: Soft Tissues and Hard Science".
Posted by David Tana at 12:30 AM