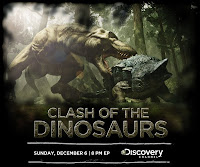 Man, I really wish that I had actually finished my series on science, education, and the media before now. I keep getting interrupted from writing it, and then something like this happens, which perfectly illustrates why I need to talk about it in the first place. This will be another quick, link heavy post, but bear with me until I can flesh out the bones of my larger post over break.
Matt Wedel over at SV-POW was a featured "talking head" in the recent Discovery Channel documentary Clash of the Dinosaurs, and did not have a very good experience. Essentially, the individuals over at Dangerous Ltd., the production company working on the program edited an interview with Dr. Wedel so that it appeared, on television, as if he agreed with an outdated and falsified notion regarding the "second brain" of sauropod dinosaurs. Dr. Wedel was obsiously very upset at this, as his reputation among his peers and collegues could be seriousy tarnished.

He wrote to Dangerous Ltd., and got a response that he was not entirely happy with. Dr. Wedel's exact words, according to an e-mailed transcript from Dangerous Ltd., were as follows:

"Matt 14.45.08 Ok one of the curious things about saurapods is that they did have a swelling in the spinal chord in the neighbourhood of their pelvis. And for a while it was thought that may be this was sort of like a second brain to help control the back half of the body. Erm there are a couple of misconceptions there. One is that most animals control large part of their body with their spinal chord. If you’re going through day to day operations like just walking down the street and your minds on something else your brain isn’t even involved in very much controlling your body. A lot of that is a reflex arc that’s controlled by your spinal chord.

So its not just dinosaurs that are controlling their body with their spinal chord its all animals. Now the other thing about this swelling at the base of the tail is we find the same thing in birds and its called the glycogen body. It’s a big swelling in the spinal chord that has glycogen which is this very energy rich compound that animals use to store energy. Problem is we don’t even know what birds are doing with their glycogen bodies. Er the function is mysterious – we don’t know if the glycogen is supporting their nervous system – if its there to be mobilised help dry [should be 'drive' -ed.] their hind limbs or the back half of their body and until we find out what birds are doing with theirs we have very little hope of knowing what dinosaurs were doing with their glycogen bodies."

To me, this quote very clearly establishes three things: first, that sauropods (like the Sauroposeidon featured in the documentary) do have this swelling in the spinal chord. Second, that birds have it to, and we don't know what it does in them, so we can't know what it did in sauropods. And third, that the idea that it is a "second brain" is an outdated misconception that Dr. Wedel DOES NOT AGREE WITH.

This is how it was edited and how it aired on television:

"One of the curious things about Sauropods is that they did have a swelling in the spinal cord, in the neighborhood of their pelvis. This was sort of like a second brain to help control the back half of the body."

Say WHAT? That is the exact opposite of what he was saying. He was trying to take that misconception out of the public eye, not encourage it. Whether an honest mistake or deliberate modification of someone's words, somebody should have lost their job over this, as it completely misrepresents not only Dr. Wedel, but also the scientific community on the whole. It undermines his professional credibility, and even worse in my mind, presents ideas to the general public that are FALSE. I'm all about increasing the public interest in paleontology and science, as my readers well know. But I have a real problem with production companies or networks not being accurate with their data, and twisting someones words in a deceitful way. It's simply not cool.

Dangerous Ltd. said that they "had no wish to suggest (Dr. Wedel was) presenting an old, discredited argument" and that they "were simply working on the show ever aware of the demands of our audience." I find this pretty offensive too, as it seems to reflect their opinion that they either have to dumb stuff down in order to have the audience understand the ideas being presented, or lie to the audience entirely to keep them interested. I don't mean to sound agressive or harsh with any of this, but it seems horribly wrong to me.

In the end, there was a semi-victory for Dr. Wedel. Discovery is going to fix the mistake before the program is replayed on air or released on DVD/Blu-Ray. But it still doesn't undo the damage already done. People that follow paleo-blogs or get e-mails from the vert-paleo mailing list have been hearing about this, but what about all the people that watched the show, take it as fact, and don't do any research after that? They have been misinformed. I don't know whether the blame falls on Dangerous Ltd., Discovery Communications or anyone inbetween, but this certainly stresses the importance of accuracy and scientific research going into any media presentation - film, print, whatever. The media needs to be held to just as high of a standard as academics are when presenting scientific ideas to the public. When the media makes claims and misinforms, it makes the scientific community look bad. It gives the public ammunition to criticize science with, and reasons to not trust scientific evidence when they should. This is not a good thing, I assure you.

Let me stress for the record that I'm not against these kinds of programs or articles in any way shape or form. I think it's important to get people interested in science. But I think there is a line that needs to be established as well, because if you are going to distort facts to increase that interest, you are no longer supporting good science, and that completely defeats the purpose of this type of outreach in the first place. So while Clash of the Dinosaurs might have made me wince quite a few times, these shows are important in a larger context. But they have to be held accountable for the information they present, and that certainly doesn't excuse situations like Dr. Wedel's.

There will be more to come on the topic of science and the media, I assure you. In the meantime, feel free to check out some of the other articles and posts on this particular instance at the links below. And as always, thanks for reading.