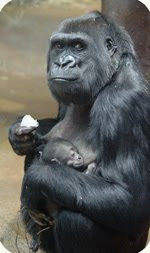 Watching Kibibi grow and learn has been an amazing experience for her keepers and the public alike. I myself have spent many hours observing this "little lady" (the English translation of her Swahili name) in her indoor and outdoor enclosures as she explores her surroundings, gets to know her family, and develops her independence. Despite being a captive born gorilla, Kibibi's level of development is similar to, but shows slight variations from, her wild born counterparts (Nowell et al. 2007). As she has aged over the last year she has gradually spent less time clinging to her mother, more time interacting with her siblings and grandmother, and traveling on her own.

Being able to see this kind of development first hand is really wonderful for a lot of reasons. People love baby animals, and there is something completely satisfying about sitting and watching a baby gorilla in particular, whether she's playing or sleeping. It is remarkably like watching a human child, yet still not the same. Gorilla and a human infants develop cognitively at around the same rate for the first 18 months of life (Redshaw 1978), and although there are a noticeable physical differences, I think that the connection between humans and gorillas at a young age is more visible to a general audience than it is when a gorilla reaches maturity. 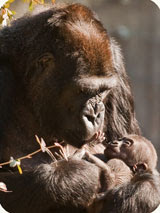 Take a look at Kibibi's tiny pink fingers and then look at your own. Maybe you'll be able to make eye contact (but don't maintain it for too long - that's taboo in gorilla society), and notice that there is a bit more going on in that little gorilla head then you previously imagined was possible. Like us, gorillas are extremely intelligent, and have learned to communicate their thoughts and emotions with humans using GSL (gorilla sign language) and even through art. They care for their young, live in family groups, and take care of one another. Anatomically and behaviorally, the similarities are there. You just have to take the time to notice. And watching people watch Kibibi, I've seen that having a baby gorilla around is a great way to get people to do just that (photo at above-right by FONZ Photo Club member Janice Sveda).

As mentioned in previous posts, I feel that being able to understand and appreciate our connectedness with the living world is a uniquely human gift that many take for granted. I think it’s important to realize the relationship between ourselves and our ape family, because if more people did, they might have more respect for the other organisms we share the planet with, and feel a greater obligation towards protecting them, and sustaining ourselves and future generations, in the process. Gorillas are amazing animals. Go visit Kibibi and her family at the National Zoo and see for yourself. For her birthday, let's all chip in and get her a gift: hope for the survival of her species, and all non-human apes. I know one day when I have children, I'm not going to want them to live in a world without gorillas, who in the wild face adversity like habitat loss, poaching, and communicating human diseases. Kibibi represents hope for her species, and inspiration for ours. I think she is the real gift, so please join me in celebrating her birth. 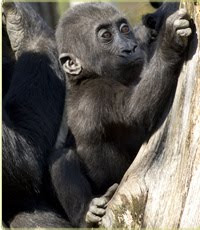 Nowell, A. A. and Fletcher, A. W. 2007. Development of independence from the mother in Gorilla gorilla gorilla. International Journal of Primatology 28, 441-445.

All images are from the Smithsonian National Zoological Park/Friends of the National Zoo website, from the "Baby Gorilla" page at http://nationalzoo.si.edu/Animals/Primates/MeetPrimates/MeetGorillas/2009baby/default.cfm
Posted by David Tana at 10:00 AM