Things I Learned This Semester #14

At the beginning of the semester, I was pleasantly surprised to learn that many of my readers like birding as much as I do. In fact, I got a pretty positive response from my "virtual birding" posts and the phylogenetic format they followed. So I figured why not give the people what they want, right? Let's expand that cladogram a little to accommodate my two new backyard birds from Saturday's post.

The Baltimore oriole (Icterus galbula) is a blackbird (Icteridae) that is usually attracted to feeders that have jams and jellies, nectar, or orange halves.  I don't have any of those in my yard, so this guy was foraging for insects and fruit in the mulberry tree.  He was very spastic about it as well, fluttering about from limb to limb almost too quickly for me to get a shot off. And as I was tracking him, I caught a glimpse of the yellow-rumped warbler in the same tree.  He was a lot harder to spot (the bright orange breast of the oriole kind of gives it away) but the yellow patch on the flank made him stand out a little bit.  It's hard to tell the males from the females, particularly at that distance, but I'm pretty sure that the brighter plumage indicates a male.  I'm much more certain that this is the Myrtle warbler subspecies (Septophaga coronata coronata) found in eastern North America.  It is one of the first New World warblers (Parulidae) to leave in winter, and one of the first to return in spring.  As it turns out, these two migrants are each others closest living relatives among the birds that have so far been added to the "tree". 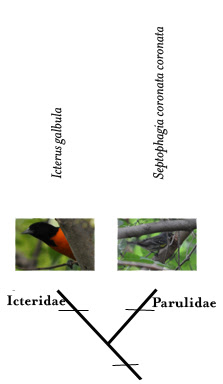 Both the oriole and the warbler fall within the monophyletic "nine-primaried oscine" clade along with the cardinals (Cardinalidae) and finches (Fringilidae).  The Icteridae + Parulidae clade is a sister group to Cardinalidae, and the Fringilidae is a sister group to the Icteridae + Parulidae + Cardinalidae clade.  With so much diversity among passerines, it's hard to keep track of all the relationships!  But I can try. 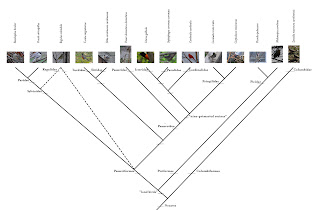