Earth Day - Make it every day.

This wouldn't be a very decent, science/nature themed blog without a post about Earth Day. Celebrated annually on April 22, Earth Day (coordinated globally by the Earth Day Network) is a time when all people, regardless of race, gender, income, or geography, are reminded of their moral right to contribute to a healthy, sustainable environment. 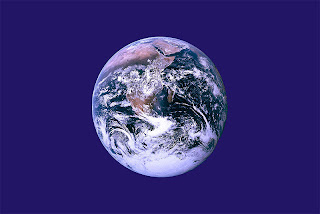 The Earth Day Flag, from Wikimedia Commons.
Earth formed roughly 4.54 billion years ago from the accretion of dust and gas left over from the formation of the Sun. Still a mass of molten rock constantly bombarded with asteroids, comets, and sometimes even planetoids, the Earth eventually began to cool as water vapor formed. As the crust solidified, volcanoes spewed out gas forming an early atmosphere. The above mentioned asteroids, comets, and other extra-planetary bodies delivered ice and water to the Earth's surface which, along with the water vapor in the atmosphere, condensed to form the planet's oceans. Solar activity and greenhouse gasses raised the surface temperature of the planet, keeping the seas from freezing, and eventually, Earth's magnetic field was formed enough to keep the atmosphere from being stripped away from the planet. With these conditions in place, basic elements (CHON anyone?) began to form complex organic molecules, some of which became self replicating. Around 3.8 billion years ago, these molecules formed the first life on the planet. Ever since then, living things have evolved, diversified, and gone extinct in an ongoing process of natural selection. As of today, the Earth is the only planet know to humanity that hosts life of any kind in this way. 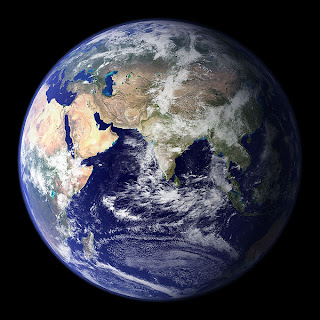 But why does this matter? And why should we celebrate Earth Day? Two very important questions with even more important answers. To answer the first, it matters for a lot of reasons. The Earth is fragile. The complex living and non-living systems that interact with one another, be it in the course of a day, or over 100 million years, are what makes our planet capable of sustaining life. In the last 200 years or so, human beings have made changes to these systems in a way that no other species has been able to in the history of the planet. And considering that our species has only been around for about 150,000 years, we're making a pretty big impact given the brief period of time we've been around. This is a problem. Because the truth of the matter is, it would take 10-20 million years for a new planet to accrete. It would take another billion years for life sustaining conditions to take hold, and that's only if it it were lucky enough to go through the same turbulent processes that Earth did. The point I'm trying to make is, if we "break" this planet, we aren't exactly going to be getting a new one any time soon. This is a call to action. Humanity is at a crucial turning point where we can either continue on our current path, or start making some real changes to our way of life.

Humans clear-cut forests for agricultural use. We harvest marine life from the oceans at an alarming rate. We contribute exponentially to greenhouse gasses. We melt polar ice, waste and pollute fresh water, hunt species to extinction; the list goes on and on. And the sad thing is, most of us do this without even thinking about it. It's not malicious, or intentional. It's just a way of life that people have become comfortable with. And there are choices that each of us can make, every day, that will make a difference. You can purchase ecologically friendly products, be it food or laundry detergent, to reduce the amount chemicals and waste products being pumped into the environment, save natural resources, and bring the costs of said products down. You can reuse products you've already purchased. Buying a reusable water bottle to carry and refill every day is better for the environment than buying thousands of plastic water bottles a year that you will just throw out. In fact, don't throw them out if you do have to buy them. You can recycle them and many other items you may throw out on a daily basis, reducing greenhouse emissions and saving energy in the process.

These are simple, everyday things that you can do to make a difference (and the list goes on and on). Now the everyday individual might think to them self, "It doesn't matter what I do on a daily basis". But the truth is, it does. If everyone that said that made changes to the way they went about their day, 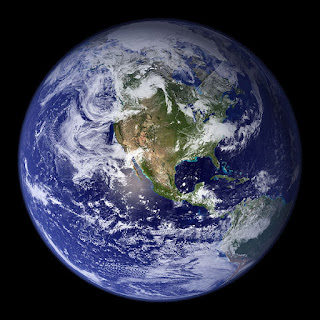 it wouldn't be about one person anymore. It would be billions of people. All making sustainable, healthy choices for themselves and all other living and non-living things on the planet. But this kind of global awareness has to start at the individual level.
To answer my second question up there, we should celebrate Earth Day because if it takes a specially designated day to get the attention of the entire human population in the hopes that they will make those individual choices, so be it. Educating and spreading awareness is the key to our survival, as well as the survival of this planet we call home. So this year, celebrate Earth Day. I know in my area, the Earth Day festivities continue into the weekend, with an Earth Day Clean-up at the Smithsonian's National Zoological Park, a Climate Rally at the National Mall, Earth Day Events at the Maryland Science Center, and even some science and tech and agricultural activities geared towards education and sustainability at Maryland Day 2010. Go see Disneynature's Oceans, who will give part of the ticket sales from opening week (April 22-April 28) to The Nature Conservancy's Adopt a Reef Program. And next week when things have settled down, don't forget about the Earth. It's always there, right under your feet, and it always needs your help. It's our responsibility to future generations, other living things, and the Earth itself to do our part to protect and care for our beautiful planet.

Images of Eastern and Western Hemispheres of the Earth from Wikimedia Commons.
Posted by David Tana at 12:00 AM