It has been entirely too long since I've blogged here at Superoceras.  Shame on me.  But if there is one thing that will get me back in front of the computer screen to write, it's baby ankylosaurs.  I mean, come on, look at how cute this little fella is.


In a paper published in the current issue of the Journal of Paleontology, Ray Stanford of the Mesozoic Track Project and David Weishampel and Valerie Deleon of the Center of Functional Anatomy and Evolution at John Hopkins University, introduce us to Propanoplosaurus marylandicus, the "lizard that predates the completely armored lizard, collected in Maryland".  That's right folks, Maryland.  While better known for another armored sauropsid, Maryland is now the proud homestate of the first (diagnostic) nodosaurid fossil and the first dinosaur hatchling discovered on the eastern seaboard.  That's pretty cool, if I do say so myself.

This specimen, while not consisting of any actual body parts of the baby nodosaurid, is preserved as partial casts and partial molds of the animal, making it a particularly interesting body fossil.  It was discovered in association with a series of dinosaur footprints, attributed to the same type of animal, that were found in the Lower Cretaceous Patuexnt Formation. This formation is the oldest stratigraphic unit exposed in the Atlantic Coastal Plain of Maryland, and has yielded more than just the baby and footprints.  From it, paleontologists have been able to recover enough material to reconstruct the Mesozoic ecosystem in which this hatchling nodosaurid lived, and in which the footprints were left. All right here"in our backyard" (more on that later). 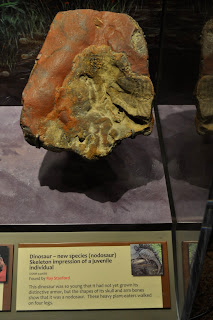 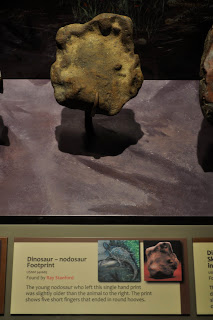 The fossil nodosaur holotype (left) and USNM 540685, a nodosaur footprint (right), both found by Ray Stanford, and on exhibit at the Smithsonian's National Museum of Natural History.


Some have apparently questioned the legitimacy of this find, suggesting that USNM 540686 is actually a pseudofossil -an inorganically created marking, impression or deposit left on or in a mineral that resembles a once living thing -and not the mold/cast of an actual animal left behind after it drowned.  But the authors of the paper are confident that they are looking at the real deal; so confident in fact, they assigned the critter to its own, new genus.  As Brian Switek pointed out over in his post at Dinosaur Tracking, this is something that paleontologists try not to do so much nowadays, because it is hard to determine which juvenile (or hatchling in this case) skeleton will grow up to become which adult skeleton.  But considering the fact that there is only one other ankylosaur known from that time and location, it's only known from the teeth it left behind, and it has been suggested that it is a nomen dubium, I think little Propanoplosaurus is safe in its name, for the time being.

Perhaps one day we'll be able to determine what a Propanoplosaurus looked like as a fully grown individual.  Or maybe, it will turn out to be a different, already described dinosaur, and we'll have to abandon this new genus.  But until the Arundel Clay starts churning out more specimens, we'll have to settle for the flora and fauna we already know from this period in Earth history.  As I mentioned above, I'll get to that in a future post.  Consider this my easing back into blogging, and a teaser for more to come. And rest assured, it will be up before another month slips by me.