It's true. Every since I was a wee lad, I've had a soft spot for chelonians. Perhaps it had something to do with a group of adolescent, transmogrified, "reptilian" practitioners of an unconventional martial art style. Or maybe it was just because the order Testudines is chock full of really (anatomically) odd, really cool critters. Shame on me, once again, for so far excluding an entire clade of organisms here at Superoceras. I'll use the recent publication of a paper in the Journal of Vertebrate Paleontology to change that, straight away.

Turtles are strange. Really strange by the standards of Tetrapoda at least. All other tetrapods with limb girdles (the shoulders and hips) place those limb girdles outside of the rib cage. Think of a chicken, or lizard, or yourself. Your shoulder blades sit outside of your rib cage, as do your hips. But turtles do something completely different. They have a shell. The top portion (called the carapace) is formed from the fusion of ribs, vertebrae, costal and neural bones, and some other stuff thrown in for good measure. The bottom portion (called the plastron) if formed from the fusion of the clavicle, interclavical, and some dermal bones. These two pieces articulate with one another, forming the shell. Because the shell incorporates the ribs, the thoracic and pelvic girdles sit inside, not outside, of them. That's some wild stuff right there.

Reading the title of the JVP paper, I didn't know what to expect. It included the binomial name of a newly described genus and species of turtle from the Campanian Age of West Texas. A name that clearly caught my attention enough to have me write a post about it: Chupacabrachelys complexus. Read it again, and let it sink in. The new genus name means "Chupacabra turtle" (and the species name has something to do with a Blue Man Group performance tour). Say what? I half thought I was about to delve into a description of fanged, blood-sucking, demon turtle from the Upper Cretaceous. But that's a little sensationalist of me. Luckily, I decided to actually read the paper before I went into a discussion about the turtle in question.

Chupacabrachelys is a pleurodiran, or "side-necked" turtle. Unlike its sister group Cryptodira (which contains the majority of modern tortoises, terrapins, and sea turtles), Pleurodira is unique because of its neck anatomy. While cryptodirans lower the neck and pull the head straight back when withdrawing it into their shell, the pleurodirans have to fold their necks, which are generally much longer, to one side to withdraw theirs. Pleurodira is also much less diverse today than it was in the past. Extant species are restricted to freshwater habitats in the southern hemisphere. But one extinct family, the Bothremydidae, used to have a very high diversity and a wide geographic range. Bothremydids are united by a few shared characters in the skull, and have shells that are so similar, it is difficult (if not almost impossible) to distinguish different genera with only shell material. 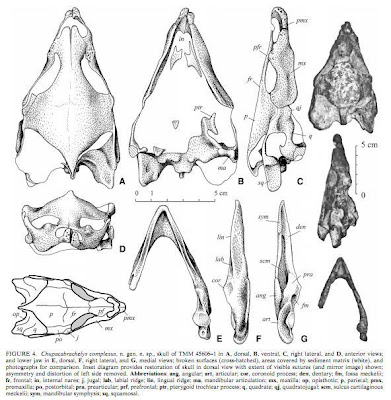 Because of the shared characters of the skull and jaws, the diversity of the bothremydids was only recently realized as a variety of extremely well preserved skulls were discovered. These skulls of different shapes and sizes turned out to be the the key to identifying the different species of turtles. The same is true of Chupacabrachelys. The skull and lower jaw are triangular and narrow, compressed dorsoventrally, with elongated orbits and rugose maxillary projections (see Figure 4 from Lehman & Wick 2010 above). This is very unlike most of the typical, rounder turtle skulls I'm familiar with. This shape makes the skull almost look like that of a canid, minus the teeth of course. This is actually how C. complexus got its name; the authors of the paper thought the skull looked like that of mangy coyote, which many people attribute chupacabra sightings to. 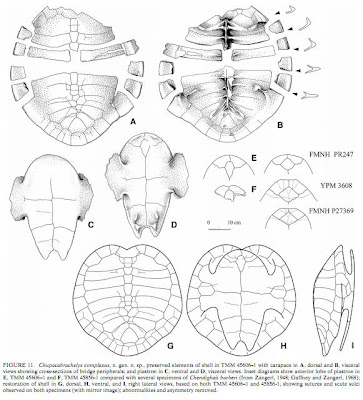 The type specimen (TMM 45606-1) is fairly complete, only lacking the hindlimbs. This makes it one of the most complete bothremydid skeletons known. The carapace and plastron are represented enough to make a fairly confident restoration (see Figure 11 from Lehman & Wick 2010 above). There are numerous vertebrae, nearly complete forelimbs, and some pelvic material as well. This is due in part to the taphonomy of the specimen. It was found disarticulated (but not likely scavenged or predated upon) in the base of a very fine grained cross laminated sandstone in the upper shale member of the Aguja Formation. This formation consists of a marine coastal shoreline sandstone to the east interbedded with a terrestrial coastal plain mudstone to the west.

If I were a betting man, I'd say this was probably a marine turtle. But I can't imagine what kind of selection pressures went into the evolution of that elongated skull, or what ecological niche Chupacabrachelys was filling. Either way, this new species represents another branch of the ever expanding bothremydid family tree. And it's pretty cool for that reason alone. Pleurodirans are a unique group of turtles, set inside an already unique group of vertebrates. Whether you're staring into an aquarium tank trying to find the brilliantly camouflaged mata mata (Chelus fimbriatus) or admiring the colossal fossilized skeleton of Stupendemys geographicus (the largest turtle ever known to have existed) pleurodirans are as captivating as they are odd. And while Chupacabrachelys complexus may not be as mysterious as its modern cryptid namesake, I think it makes a wonderful addition to the family.