Things that are not dinosaurs: Pterosaurs

Pterosaurs, the (non-avian) flying archosaurs of the Mesozoic seem to be getting a lot of press recently. Strangely enough, in the year I've been blogging here at Superoceras, I haven't really said anything about them. For shame! Pterosaurs are a fascinating group of animals, so for those that aren't too familiar with them, I'd like to provide a brief introduction.

As indicated by the title of this post, pterosaurs are not dinosaurs, although they are often referred to as such by the popular media (as disappointingly seen here and here). Let me break it down, phylogenetically. Within crown group Archosauria, (the "ruling lizards") you have Avemetatarsalia (animals more closely related to modern birds) and Curotarsi (animals more closely related to modern crocodilians). Within Avemetatarsalia, organisms like Scleromochlus provide an outgroup taxa to Ornithodira which is the broken up into two distinct but closely related groups of organisms, Dinosauromorpha (dinosaurs, and their kin) and its sister group Pterosauomorpha (the pterosaurs). If that's a little hard to follow, here is the cladogram I know you are all dying to see. And for a little background on how to read a cladogram, check out this old Superoceras post.

Cladogram modified from Benton (2004). As you can see, pterosaurs are not dinosaurs.

So now that we've established what pterosaurs are not, let's talk about what they are (or were, I suppose). The pterosaurs, or "winged lizards", were a group of flying reptiles that dominated the Mesozoic skies from the Late Triassic (220 mya) to the very end of the Cretaceous Period (65.5 mya). They were the first vertebrates known to have evolved powered flight, and existed in a wide range of sizes, from the tiny Nemicolopterus which could have fit in the palm of your hand, to the giant Quetzalcoatlus which was as tall as a giraffe on the ground, and the size of a small plane in the air. Based on fossil evidence from various pterosaur species, we know that some, if not all pterosaurs were partially to fully covered in hair-like integumentary structures called pycnofibres. These structures may have been used as a method of insulation, providing a line of evidence to support endothermy in pterosaurs. 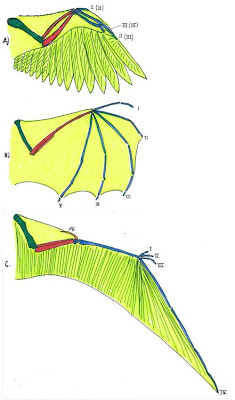 What about wings? Well, on the inside, pterosaur wings were like those of birds (the second group of archosaurs to evolve powered flight), having hollow bones (some filled with air sacs) that made them more lightweight. On the outside, they were more like those of bats, having a membranous structure attached to the fingers. But while homologous to the forelimbs of other tetrapods, pterosaur wings were also quite different from those of other flying vertebrates.

As you can see in the crude illustrations above at left, wings of birds (A), bats (B), and pterosaurs (C) are all made up of the same bones (the humerus in green, the radius and ulna in red, and the bones of the hand in blue), but have very different configurations. The bird has reduced digits I, II, and III (or II, III, and IV depending on who you talk to these days) and lost digits IV and V (or I and V) completely, and covers the entire wing in feathers to create surface area. The bat retains all five of its digits, and places a wing membrane around digits II through V, leaving digit I free to use as a grasping appendage. The pterosaur wing however uses a unique configuration, with an elongated digit IV providing the attachment for the wing membrane, leaving digits I through III free. The wing membrane itself was reinforced with fibers known as actinofibrils that stiffened the wing allowing it to maintain and possibly control it's shape. Present in the wrist is a bone only found in pterosaurs, the pteroid (in orange). Most researchers currently believe that is is a true bone, but it's origin and relationship to the other bones of the manus is currently unclear.

The earliest known pterosaurs were generally small bodied with long tails and jaws full of teeth. Traditionally known as "Rhamphorhynchoidea", this group has turned out to be paraphyletic, meaning that it includes the last common ancestor but not all the descendants of a clade. For this reason, "Rhamphorynchoidea" is no longer recognized as a formal clade, but rather descriptive term for a grade of basal pterosaur that is still used in the paleontological community. Rhamphorhynchoids appeared in the Late Triassic and disappeared in the end of the Jurassic Period, giving rise to the Pterodactyloidea. Pterodactyloids were larger bodied, had greatly reduced tails, and many of the derived forms had toothless jaws and ridiculously ornate crests.

Pterosaurs were a highly diverse group of reptiles that managed to rule the skies (yes, they could certainly fly, and I highly doubt there was a lot of resource competition from birds) up until the Cretaceous-Tertiary extinction event. Current research suggests that they were pretty intimating on the ground as well. But in the interest of keeping this a brief introduction, I think I'll leave those topics for another day. These extraordinary animals are certainly deserving of more posts here at Superoceras, so be on the lookout in the future for more posts on pterosaurs, as well as other prehistoric critters that are, contrary to popular belief, not dinosaurs.