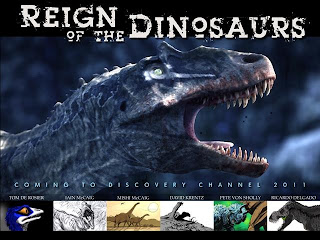 Image from /Film.
REIGN of the DINOSAURS

"Avatar meets Jurassic Park as the latest paleontological research meets Hollywood story telling. Discovery Channel teams with the top creative talent from Disney and Pixar to create an unparalleled television event. New creatures abound in a wondrous new world - giant dinos with Freddy Krueger style clawed hands, pygmy T-rex, frogs so big they can eat dinosaurs. Learn the latest in understanding of dinosaur behaviors with exotic mating dances, the inner workings of the T-rex's nuclear family, dinosaurs drunk on fermenting fruit, dinosaurs in apocalyptic events, the underwater birthing of mosasaurs, and prehistory's angriest mammals. A daring and provocative new chapter in television, REIGN OF THE DINOSAURS is bound to be the benchmark for all future dinosaur natural history programming.

Matt Martyniuk over at DinoGoss actually broke this story, in much greater detail, yesterday evening. Check out his post!
Posted by David Tana at 9:36 AM