Squamates and hominids and dinosaurs, oh my! 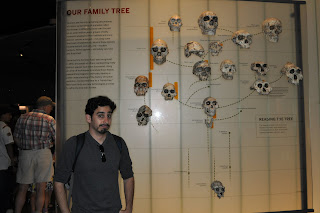 Me and "the family" in the Spitzer Hall of Human Origins.
I am a lucky, lucky boy. For my birthday, I was gifted (thanks Christina!) an admission ticket to the American Museum of Natural History in New York City. This is only the third time I've been able to walk the halls of the AMNH, but it was the first time I was granted an entire day to do so at my leisure. My usual trips up are with groups, and we've have to move quickly to get through things and be back on a bus by a given time. Even with an entire day, the museum is much too vast to cover. I probably managed to get through about one fourth of it, and I was rushing a little to cover as much ground as possible. Regardless, it was a great day, and I came back with lots of photos and information that I look forward to sharing with my readers.
Dino fight! Getting in the way of Allosaurus and Barosaurus in the Theodore Roosevelt Rotunda. 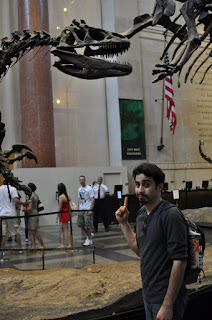 I think the highlight of this particular trip was admission to the temporary exhibition "Lizards & Snakes: ALIVE!", which as the name stated, showcased 26 different species of squamates. It was really an added bonus, as I'm a huge herp fan, and I saw a bunch of critters up close that I had previously only seen on film.
This post it just meant to be a teaser, but expect some much meatier things to come in the near future regarding my exploits of the day. If anyone has something in particular they want to hear about or see in pictures, let me know. For now, check out the AMNH's YouTube video on the "return of the reptiles".
Posted by David Tana at 12:28 PM