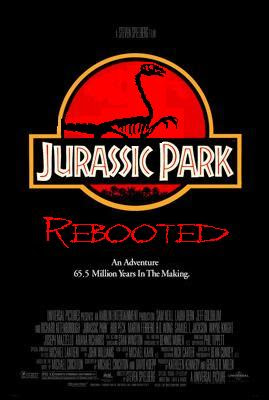 The rumor mill about future/upcoming films is always working overtime, and sometimes people wait years, even decades, before a film they heard about actually comes to fruition on the big screen. But THIS is something that Universal Studios needs to jump on IMMEDIATELY.

I know that for most professional paleontologists, the original "Jurassic Park" film (not to mention the second and third) was somewhat torturous to get through. Even in my youth, I had a lot of problems with the science depicted in the film. But I'm sorry, the concept was still great, and I knew exactly how Dr. Alan Grant felt the minute we saw that first Brachiosaurus - or is it officially Giraffatitan brancai now (Taylor 2009)? It was a blockbuster film, and still remains a classic.
A reboot that was just as groundbreaking would be much welcome. Scrap the dinosaurs-cloned-from-ancient-mosquito-leftovers-preserved-in-amber-mixed-with-frog-DNA nonsense. Get some good technical/scientific advisers on, and you would have an amazing, more believable movie. How about working with Jack Horner's backwards engineering concept (Horner & Gorman 2009)? Put the dino chicken on the big screen. That way, you can use whatever artistic license you want and put all kinds of theoretical animals on the screen because no one knows what a "dino chicken" would look like. Want animals known to science? CGI technology has advanced so much since the first film, you could have a gorgeously animated pack of life size, feathered Velociraptor terrorize your onscreen protagonists instead of the over sized, "smarter than primates" ones from the previous films (Turner et al. 2007). How about a bone crushing adult female Tyrannosaurus? Should you choose to resurrect extinct species from say... soft tissue recovered from fossil bones (Schweitzer et al. 2005).

Any film in which people and non-avian dinosaurs coexist is going to be more science fiction than fact by nature. But in the last 17 years, there have been so many amazing discoveries and exciting research, that who knows what the future will hold. Paleontology is becoming a much more interdisciplinary field, and we learn more and more about the amazing creatures that used to inhabit our planet on a daily basis. It would be nice to see some of this research and real science incorporated into a studio film. And it would be even nicer to see lifelike dinosaurs on the big screen again!
References
Taylor, M. P. 2009. A Re-evaluation of Brachiosaurus altithorax Riggs 1903 (Dinosauria, Sauropoda) and its generic seperation from Giraffatitan branchi (Janehsh 1914). Journal of Vertebrate Paleontology 29, 787-806.
Horner, J. and Gorman, J. 2009. How to Build a Dinosaur: Extinction Doesn't Have to Be Forever. Dutton Adult, New York.