Here's another piece of local news from the Maryland area. The brother started kayaking on the Potomac River this summer. I wonder what he would think of this NBC Washington headline:
"8-Foot Shark Caught in Potomac River" 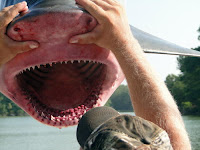 Photos (above and below) taken by Christy Henderson, from Buzz's Marina.
Now I don't know about you, but I'm a huge shark fan. Despite how the media portrays them, sharks are really not that bad either. Carcharhinus leucas, the bull shark, gets a particularly bad wrap. For several years in a row, it has been referred to as the "world's most deadly shark" by the Discovery Chanel during its annual Shark Week because of its unpredictable behavior and preference for shallow water - the same water that humans like to swim in. Is it really a surprise then, that people have run ins with this species of shark more than any other? Not really. But that only happens in, like, the ocean, right? We should be fine when we're in freshwater.
Well not exactly. I mean, you'll more than likely be fine. But that's no guarantee that you won't run into a bull shark just because you're not in saltwater. While most sharks cannot stand the stuff, C. leucas is extremely freshwater tolerant. This is because while most sharks have blood that is just as salty as seawater (because of the urea, sodium, and chlorine that build up in it), bull sharks are able to reduce the concentration of these solutes by up to 50% in their blood (by peeing, a lot), making them able to survive, long term, in freshwater environments. Freshwater environments like the Potomac River. 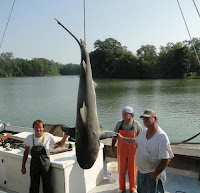 This 2.46 meter bull shark was caught on Tuesday in Cornfield Harbor, where the Potomac River meets the Chesapeake Bay. So it's not like this particular shark was swimming around the Tidal Basin or anything. And it's not the first time a bull shark has been spotted in the Potomac River either (the last was seen in 1973, and apparently a 2.51 meter bull was caught this past Wednesday). And still, even less ordinary things have been seen in or near the Bay in the last year. So I can't say this comes as a shock to me. And I'm a little disappointed that the fisherman who caught the shark thought the only option was to kill it and bring it to shore. But that's another post entirely. The point of this one is, don't be surprised if you run into one of these elasmobranchs in the Bay, or the Potomac, or the ocean. Cause they are all over the place. Also, brother, if we go kayaking anytime soon, we're going to need a bigger boat.
I know, I know. But I couldn't resist. Have a great weekend everyone.
Posted by David Tana at 4:00 PM