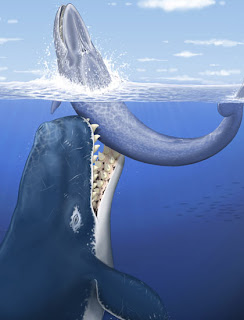 This story has been bouncing around the web since yesterday (see Nature's news release and videos on the beast after the jumps), and the above image (by C. Letenneur of the Muséum National d'Histoire Naturelle, Paris, via The Guardian) has been bouncing around with it. While there is no denying that this whale was huge and the reconstruction looks amazing, this image can be a little (unintentionally) misleading. For example, you might assume that Leviathan was snacking on animals the size of a blue whale (which the baleen whale in the image certainly resembles). This was a big animal, but it wasn't quite that big. So just how large was Leviathan? 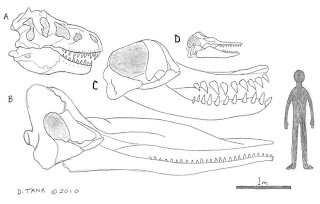 Inquiring minds want to know. So I did a real quick sketch. The image above shows the skulls of Tyrannosaurus (A), a modern sperm whale, Physeter (B), Leviathan (C), and a modern orca, Orcinus (D) alongside the "Gray Man". I based my whale skulls and scale on Figure 3 from the Nature article, and the T. rex is based on MOR 008, the largest skull specimen known at a length of 1.5 meters. That being said, yeah, Leviathan was still massive. Big enough to swallow a person whole (ok, maybe it would have to take a bite). I certainly wouldn't have wanted to be in the water with it, and I'm guessing most medium sized Miocene whales wouldn't either.

So there you have it. Giant, terrifying, predatory whale. I love it.